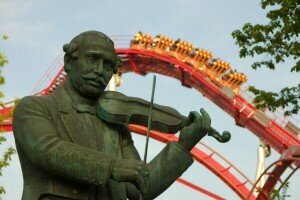 In his hometown of Copenhagen, Hans Christian Lumbye (1810-1874) was known as the “Strauss of the North.” It all started when he heard a Viennese orchestra play music by Johann Strauss I, Fire and flame, Lumbye appeared at the head of his own orchestra less than a year later, and he quickly became associated with a number of theatres and popular entertainment areas in the city. And that included the music directorship at the famous Tivoli Gardens. Similar to Strauss, he often played his violin at the head of the orchestra, and became hugely popular as a composer of dance melodies and lighter music in the style of his Viennese idol. In fact, his adoring Danish audiences considered Johann Strauss II the “Lumbye of the South.” In his music, Lumbye deliberately referenced non-musical sources, and the Copenhagen Steam Railway Galop evokes the sounds of a train trundling out of a station and grinding to a halt at the next stop. 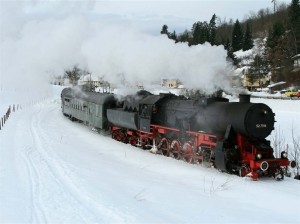 We know that Bruckner and Dvořák absolutely loved steam locomotives, and we could probably call them avid train spotters. Wagner and Brahms—in a rare moment of agreement—absolutely hated the sooty monsters. And not to be outdone, Mendelssohn described his journey on a locomotive as “sheer agony for the nerves.” Jacques Ibert (1890-1962), on the other hand, was utterly fascinated by the machinery of modernity. Planes, trains and automobiles were all the rage during the interwar period, and jazz provided the musical style to capture their kinetic energy. His Suite Symphonique: “Paris” (1930) canvasses an almost cinematic panorama of Paris in the jazz age, from its suburban parks to its urban thoroughfares. Ibert prized variety in his music, and he only agreed to write music that he was happy to listen to himself. The opening movement “Le Métro” provides a bumpy and motoric ride, and quotes several brief passages from George Gershwin’s American in Paris. 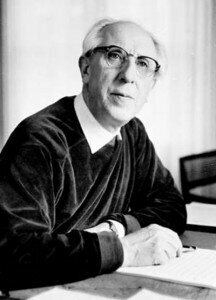 A good number of historians consider Hilding Rosenberg (1892-1985) to be the leading figure in 20th-century Swedish music. In fact he became one of the pioneers trying to free Swedish composition from the prevailing Romantic tradition. Since Rosenberg was an avid traveler, he managed to keep abreast of the latest musical traditions on the continent. In 1920 he journeyed to Berlin and Dresden and first heard the music of Hindemith and Schoenberg. During subsequent trips to Vienna and Paris he also came in contact with the music of Stravinsky and Les Six. “My only and dearest wish,” he writes, “is that my music may provide faith and strength to my fellow wanderers, and for all those who suffer and find no meaning in life.” As the assistant conductor at the Royal Opera of Stockholm, Rosenberg was in charge of a capable performing platform to showcase his compositions. And that meant various concert tours throughout Scandinavia and the United States. In his orchestral suite Journey to America, Rosenberg not only commemorates the immigration of numerous countrymen to America, he also pays tribute to the mode of transportation that won the West: The train. 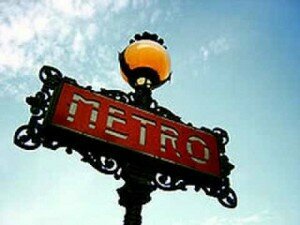 Percy Grainger was in love with train travel. Apparently it really fired his creative juices, as he is said to have spread out his music manuscripts throughout the entire carriage. Traveling as a teenager through the mountains of Italy, Grainger was inspired to compose a work for massive orchestra titled Train Music. Envisioning an orchestral body of roughly 150 players, the youthful composer regrettably did not get very far. The surviving Train Music fragment only runs for about 1 minute. 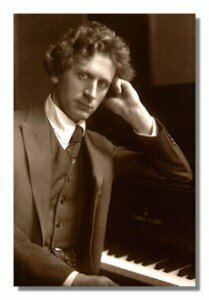 However, he did complete a short work titled Arrival Platform Humlet in 1908. Composed at London’s Liverpool Street and Victoria Stations, it details according to the composer, “awaiting the arrival of a belated train bringing one’s sweetheart from foreign parts: great fun! The sort of thing one hums to oneself as an accompaniment to one’s tramping feet as one happily, excitedly, paces up and down the arrival platform.”