Vying with Mozart for the Viennese connoisseurs 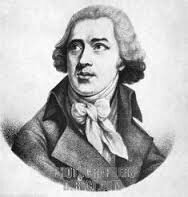 Working as a contemporary musician and composer alongside Mozart, Haydn, and Beethoven must have been a rather daunting task. Yet, a good number of critics and scholars considered Leopold Koželuch (1747-1818) the finer composer! In his highly influential Lexicon der Tonkünstler (Dictionary of Composers) of 1790-92, Ernst Ludwig Gerber writes, “Among young and old, Leopold Koželuch is without doubt the most universally popular of all our living composers, and entirely justifiably so.” Despite, or because of this high praise, Koželuch developed a rather unpleasant and snobbish personality. 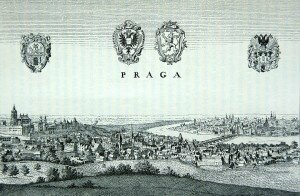 The Allegemeine Musikalische Zeitung reports on 23 April 1800, “As long as Mozart was alive, Koželuch was his declared adversary and critic. When the two musicians were both present in Prague for Leopold’s coronation, Koželuch expressed his frame of mind rather too volubly, and certainly not to his own advantage, as much of the interest that every Bohemian had otherwise taken in his countryman began to wane from that point onwards.” Mozart and Beethoven often reacted with annoyance whenever Koželuch’s name was mentioned, and it was only Schubert’s conciliatory assessment of his fellow composer that placed the focus on his artistic merits. Be that as it may, critics have rightfully suggested that “nothing has done Koželuch’s reputation more harm in Prague, Vienna and further afield, both in his own day and later, than his criticism of Mozart.” 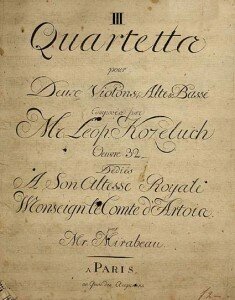 Born in Velvary, northwest of Prague in 1747, he was christened Jan Antonin but eventually changed his name to Leopold to differentiate himself from his older cousin, also a musician with the same name. And his Czech family name of Koželuh became Koželuch to make it more manageable in German.

After initial studies with his cousin and with the noted keyboard virtuosos and composer F.X. Dušek, Koželuch abandoned his law studies and opted for a career as a musician. His serenades, ballets and pantomimes proved hugely successful, and he moved to Vienna in 1778 to join a substantial number of Bohemian artists working in that city. Koželuch soon enjoyed a high reputation as a pianist, teacher and composer, and he “advanced his career with carefully cultivated connections.” For one, he composed a cantata for the death of Empress Maria Theresa, and his appointment to teach Archduchess Elizabeth was an official court position. When Mozart was literally kicked out from his court organist position with the Archbishop of Salzburg, Koželuch was offered the position. He declined, telling his friends, “It is the affair with Mozart that discourages me most of all; if he could let a man like that go, how would he treat me?”

Leopold Koželuch: Clarinet Concerto No. 2
Koželuch founded his own publishing firm “Musikalisches Magazin” in 1784, and primarily used it to publish his own compositions. However, he also forged contacts to a number of other publishers in various countries, and his connection to English publishers is well documented in his correspondence.

By around 1790, Koželuch alongside Mozart and Haydn was at the height of his career, and there was tension. In an article published in the AMZ on 24 October 1798, Friedrich Rochlitz reported the following anecdote. “A certain composer who was only then becoming better known and who, hard-working and not lacking in skill, was none the less almost entirely devoid of genius but who is now much more famous was consumed by envy at Hadyn’s reputation and no doubt is still so consumed. This man often importuned Mozart, bringing him symphonies, quartets and so on of Hadyn’s compositions, which he had written out in full score. These he would flourish in Mozart’s presence, triumphantly drawing his attention to every trivial example of the composer’s stylistic negligence—the sort or remissness that is committed by every artist, however infrequently. Mozart would change the subject or break off the conversation, until finally thing went too far. Sir, he said, extremely angrily, even if you were to put the two of us together, you would still not produce a Haydn.”

Leopold Koželuch: String Quartet in B-flat Major
Koželuch was commissioned to compose a cantata for the coronation of Emperor Leopold II in Prague in 1791, an occasion for which Mozart contributed La clemenza di Tito. Koželuch also joined the masonic lodge, and following Mozart’s death Emperor Franz II offered him the same position in his court. Koželuch became Kammer Kapellmeister and Hofmusik Compositor—basically music director and composer at the court—at double Mozart’s salary.

Leopold Koželuch died 200 years ago, on 7 May 1818. Foremost a composer in the secular genres of his day, Koželuch left around 400 compositions, including about 30 symphonies and about two dozen concertos for piano and a couple for clarinet. We also find 24 violin sonatas, 6 string quartets, and 63 piano trios. However, he was an early champion of the fortepiano, and his “Keyboard Sonatas are a treasure trove of late 18th-century Viennese keyboard style, including perfect examples of the form and foreshadowing Beethoven and Schubert.”