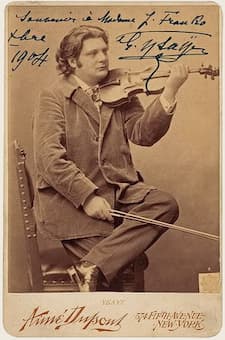 On 28 September 1886 something special happened in the town of Arlon, just west of the Belgium-Luxembourg border. On that memorable day, the violin superstar and newly appointed professor at the Brussels Conservatory Eugène Ysaÿe married the singer Louise Bourdau de Coutrai, daughter of an army officer. The guest of honour that day was supposed to have been the composer César Franck, a possibly distant relative of Ysaÿe. Regrettably, Franck was detained but he sent a small parcel via his friend Charles Bordes, whose sister-in-law, the pianist Léontine Bordes-Pène, also attended the wedding. 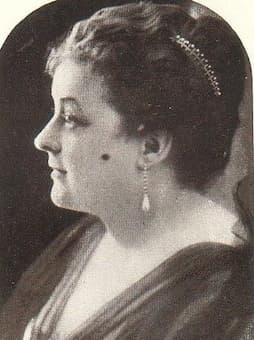 At the wedding reception, Bordes gave a speech and explained the contents of the parcel. “My dear Ysaÿe, I want you to know that it is not only out of my personal friendship for you that I have come here today, but as the representative of all your friends in Paris… Each has sent a present… but one present is still to come, the one from your friend César Franck.” When Ysaÿe opened the parcel he discovered the manuscript of the Violin Sonata dedicated to him. Now it was Ysaÿe’s turn to give a speech, and he asked Léontine Bordes-Pène to sight-read through the piece with him. Now that’s what I call a wedding present! 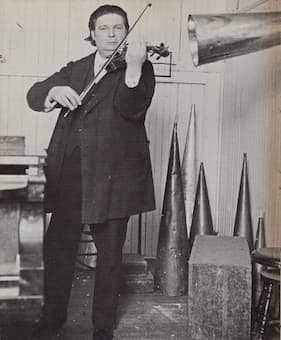 Little is known about Louise Bourdau de Coutrai, but we do know that Ysaÿe was head over heels in love with her. Two months after the wedding, and on hearing that she was pregnant, he wrote. “A son! A child! From you! From you, my darling wife! Nothing in the world could be to me such a source of joy! Nothing… nothing. I bless you, I cover you with the gratitude of my heart. Imagine, in letting my thoughts wander through the rose garden which this happy news has given me, I find them often coming back to the idea that on my return, when I hold you in my arms, I will think that my son’s arms are also wrapped around my neck.” The first-born was christened Gabriel, and the couple would have two more sons and two daughters. The couple remained devoted to each other, even though it has been suggested that Eugène “was often absent and not always faithful.” In 1902, Ysaÿe dedicated his 3rd Poem, Chant d’hiver, to his wife Louise. Inspired by reading a collection of Walloon verse by Vrindts, Ysaÿe explained, “at a time when the artist’s soul is tormented by doubt, at one of those moments when one is obsessed and tortured by the awareness of being nothing. This induces sadness and melancholy, the nostalgia for those carefree childhood days on the banks of the Meuse, which one exhales in plaintive, slightly chilly melodies.” Their marriage was essentially a happy one, and the union only separated by Louise’s death in 1924.

When Ysaÿe embarked on a series of tours to the United States he was at the height of his international fame. He literally played hundreds of concerts and was offered the post of music director of the NY Philharmonic in 1898, but declined. He did, however, accept the music director’s position with the Cincinnati Symphony Orchestra in 1918. Always on the lookout for young talents, Ysaÿe heard a performance by Jeannette Dincin—daughter of a Brooklyn physician—who was considered one of the most prominent young violinists of the day. Following her first appearances in public, Fritz Kreisler said, “Jeannette has everything that God gives an artist.” And Leopold Auer added, “She is one of the most gifted young violinists that I have heard in New York. There is no doubt if she continues her studies for at least three years that she will become a brilliant soloist.” She did study with Auer for two years and with O. Sevcik at Cornell. A friend convinced Jeannette to audition with Ysaÿe in Cincinnati, and she immediately became his student. She traveled and performed with her teacher across Europe, and a critic wrote, “One glimpses her temperament in her strong, alive face and one hears it in the vigorous sweep of her bow, in the delicate beauty of her playing.” Ysaÿe wrote to Jeannette’s father after one concert, “The audience was enthusiastic for her playing by recalling her an incalculable number of times.” 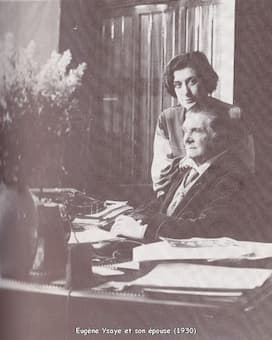 On 22 July 1927 the New York Press happily announced, “Ysaÿe Takes a Brooklyn Bride!” And they quickly added, “Although she is 25 and he is 69, the harmony of congenial tastes should make the marriage a good one.” The marriage had actually already taken place on 9 July 1927 at the Ysaÿe Chateau just outside Brussels. Sadly, the happiness of marriage was quickly overshadowed by Ysaÿe’s deteriorating health. Jeannette took over his teaching role at the Brussels Conservatory and she succeeded him as music teacher of Queen Elizabeth of Belgium. As the papers report, “after having been his pupil and wife, she became a nurse.” His diabetes worsened considerably towards the end of 1928, and Ysaÿe suffered the amputation of his foot. He recovered from the operation only with great difficulty, and put his last energies into the composition of an opera. Jeannette cared for him until his dying day on 12 May 1931. NY Newspapers reported that Jeannette suffered a nervous breakdown after her husband’s death, and returned to her home in Brooklyn one year later. Apparently, Ysaÿe’s only request of her after he died was that she “carry on her performances under his name.”