Blog
How Do Rehearsals Work?
by Oliver Pashley May 25th, 2021 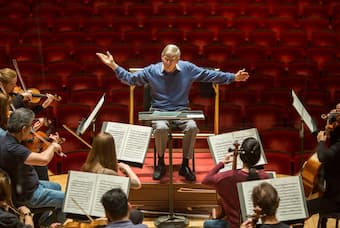 The rehearsal room of an orchestra is a strange place. We musicians take it for granted, but for people on the outside it can seem like the rehearsal is a mysterious place with its own customs, rituals and etiquette. Things that we absorb as second nature can baffle and confuse those not used to the environment, so roll up, roll up! Follow me through a whistlestop tour of the rehearsal room, with all its eccentricities and oddities… (I should say at this point that every type of music has its own rehearsal rhythm; I’ll focus on orchestral playing for now. And of course, I’m writing from a British perspective. I can’t speak for anywhere else: I’m sure every place has its own particular cultural quirks.)

Perhaps the main thing that staggers friends of mine who’ve witnessed rehearsals is the pace at which things move. It’s totally common for an orchestra to play through a piece for the first time without stopping once. It may seem astounding to spectators, but this isn’t simply a performance: we use the play-through as a chance to hear the acoustic of the room, to size up the conductor (whether they’re worth watching or not, no joke) and to settle into playing with that particular setup of colleagues. Even with symphony orchestras who play together all the time, more often than not there are at least several extras amongst the regulars, so technically speaking every orchestra could be different on any given day, and playing through the music helps the sound to settle before the detailed work can commence.

What (Not) To Say

After an initial bit of playing, the bulk of the rehearsal is often spent honing certain passages or ironing out the creases where, perhaps, ensemble suffered a bit or tuning wasn’t quite spot on. The majority of the time this is led from the podium, with the conductor structuring the rehearsal and deciding what to rehearse. From time to time the front desks of string players will comment and suggest things, and on rare occasions other principal players will step in and ask questions. The orchestra is a strange animal, socially speaking: unless you are a principal you basically never, ever ask a question out loud (unless you want to gaze out at a sea of raised eyebrows). More often than not, the thing you’re worried about (for example, a passage not being together) will be a concern shared by the conductor or other principals, so it’s best to trust that it will get sorted out eventually. The thing that is apparently oxymoronic about an orchestra is how quiet they are – apart from when playing, obviously. 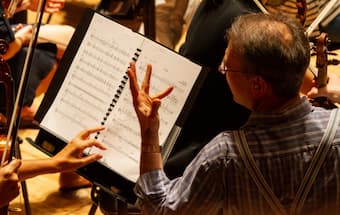 The atmosphere in an orchestra is, broadly speaking, professional and efficient. The vast majority of musicians are friendly and lovely, but like with any other job, there are people you just might not get on with. People are often astounded when I tell them apocryphal stories of certain orchestras where certain players don’t speak to each other: “But, how do they manage to play together?” they cry. Yes, music is a passion for us musicians – but it’s also a job. Don’t get me wrong – we like to socialise too (a little too much sometimes, but that’s for a whole other article), but, musically speaking, we have to be able to turn up and get the results whatever is going on in our private lives.

From the outside, rehearsals can seem beguiling and fast-paced, the orchestra bursting out at full throttle only for the sound to evaporate seconds later, businesslike chatter taking its place. And, in truth, rehearsals are a little beguiling and fast-paced, even for the people playing. We have to be focused the entire time to pick up every comment and react to suggestions that are coming from the conductor, in addition to sorting out our own issues of tuning, balance, rhythm… the list goes on. And while it may sound stressful, it’s also exhilarating – and being part of a sound like that is something many of us will never take for granted.