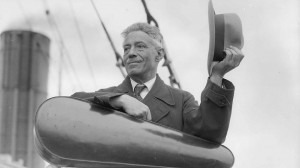 Violinist Fritz Kreisler was one of the great musical personalities of the early 20th century. An easy-going and charming personality combined with insightful interpretations and technical mastery to produce memorably recordings and live performances. Yet behind the immediate exterior of an amicable and seasoned performer hid a highly talented composer! It has been said that imitation is the truest form of flattery and Fritz Kreisler took full advantage of that saying. He claimed to have found a stash of unknown manuscripts by important Baroque composers in a French monastery. At least that’s what he told his adoring audiences. Turns out that the composer of these crowd favorites had always been Kreisler himself! But when audiences found out that an “unknown” concerto by Antonio Vivaldi had been discovered, they responded with boundless enthusiasm and appreciation.

Fritz Kreisler: Concerto in C Major in the style of Vivaldi
Without doubt, Fritz Kreisler was a musical prodigy! He won the highest honors at the Vienna and the Paris Conservatories before the age of 14, and developed into the most popular and highly rated artist on his instrument since Paganini. But his talent was not confined to music as he wrote and spoke in seven languages, and collected rare manuscripts, primitive paintings and violins. Yet through it all, Kreisler remained ever a modest and humble man. “Genius,” he once remarked “is an overused word. The world has known only about a half dozen geniuses. I got only fairly near.” When a genius performer decides to compose for his solo instrument, the results are some of the most popular violin pieces in the universe. In all, Kreisler authored approximately 30 original compositions for violin and piano, making highly valuable contribution to the literature. Here as elsewhere, he combined his expert knowledge of the possibilities of his instrument with an exceptional gift for melody.

The Vienna Conservatory had a strict policy that no one under the age of fourteen be admitted. Young Kreisler must certainly have made an impression, because they admitted him for study at the tender age of 7! Besides taking violin lessons, Kreisler also had to take instruction in theory from the aging Anton Bruckner. Unfortunately for Bruckner, Kreisler would play a number of pranks on his teacher. Bruckner had a pug dog named Mops who always came to lessons. After morning classes, Bruckner would go for lunch, leaving Mops with his students. So Kreisler played a leitmotif from Wagner while chasing the dog around the room. Next, he played the theme from Bruckner’s Te Deum while feeding Mops pieces of his sandwich. Soon the dog showed a distinct preference for the Bruckner theme. After a few weeks of training Kreisler approached Bruckner and said, “I know you are devoted to Wagner, but even a dog would know that you are a better composer.” Bruckner took exception, but when Kreisler played the Wagner motif Mops ran howling from the room. But when the Bruckner was played, the dog came straight back in, wagging his tail and begging for affection and food! I am not sure Kreisler ever told Bruckner the whole story.

Fritz Kreisler: Sissy
While living in the United States, Kreisler wrote the musical comedy Apple Blossom for Broadway in 1919. It ran at the Globe Theater for 256 performances, and once he returned to Vienna he followed up with Sissy for the Theater an der Wien. Detailing the love story of the Bavarian empress-to-be Sissy and the young emperor Franz Josef, the production had 289 straight performances. Although Sissy never went to Broadway, it was picked up by Hollywood as the basis for the film “The King Steps out,” that featured a reduced Kreisler score. It should be already obvious that Kreisler rejected the compositional approach of Schoenberg and the Second Viennese School. Yet in his string quartet he was looking for new ways of expressions while retaining aspects of traditional tonality. Possibly remembering his composition lessons with Léo Delibes at the Paris Conservatoire, Kreisler composed the quartet in 1922. Considered programmatic and autobiographical by a number of critics, Kreisler did tell his biographer that it was “my tribute to Vienna.”