Approaching his 80th birthday, Camille Saint-Saëns was appointed by the French government as “First Delegate to the Franco-American Commission for the Development of Political, Economic, Literary, and Artistic Relations” for the 1915 Panama-Pacific Exposition in San Francisco. Organized to commemorate the opening of the Panama Canal, Saint-Saëns was to give lectures, conduct concerts of his music, and also compose a new work for the occasion.

A seasoned world-traveler, Saint-Saëns wasted no time and boarded the “Rochambeau” for a treacherous crossing of the Atlantic. Dodging German submarines, Saint-Saens safely arrived in mid-May and first disembarked in New York before heading west. The San Francisco Chronicle reported on 22 May 1915, “The most exciting part of the concert—the Boston Symphony Orchestra had performed an all-French program—was the unannounced and modest guest of honor.” 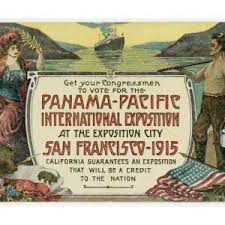 Saint-Saëns had a pretty good idea of the intended composition. According to his own words, he sought to evoke California’s “land of flowers, the bustle of the fair, the melodies of Spanish settlers, and simultaneously the pioneer labors of France in digging the Panama Canal.” And the result was Hail, California, a musical extravaganza that combined the Exposition Orchestra, Sousa and his band, and the 117-rank Austin organ played by Wallace A. Sabin. 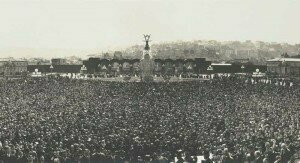 Opening Day of the Panama Pacific International Exposition, place of the premiere of Hail, California

Local critics delightedly described the pleasure of Sousa and other musicians in “watching Saint-Saëns conduct,” and the work was given a total of three times. But what about the music, I hear you say! True to his appointment as “cultural ambassador,” Saint-Saëns incorporated the nations anthems of both countries into his composition. The “Marseillaise” and the “Star-Spangled Banner” appear first separately, and then simultaneously in the grand Finale. And as I had previously mentioned, Saint-Saëns also gave a lecture with the ominous title, “On the Execution of Music, and principally of ancient Music,” on 1 June 1915.