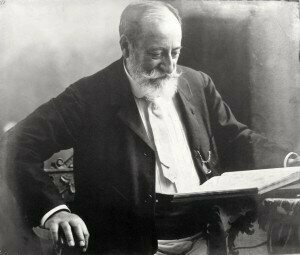 The French choral movement known as the orphéons originated during the French Revolution. Within 15 years, the initiative was so popular that it led to the creation of the Paris Orphéon choral society, an organization eventually directed by Charles Gounod. The society was imitated throughout France and the choral movement expanded exponentially. In 1855, there were some 300 choirs, with that number growing to over 3000 by 1870. The members of these vocal ensembles came from the entire strata of French society, and the French State education system saw in them “a moral pastime for the people as well as a means toward education and progress.” Camille Saint-Saëns participated in this movement by composing little-known works that detail his love of French prosody and his keen interest in balance and form. Simple harmonies and skillful modulations inform these fun and reasonably easy to sing gems, with Saint-Saëns democratizing serious music.

As we all know, Camille Saint-Saëns never obtained the Prix de Rome, the annual prize awarded by the Académie des Beaux-Arts. However, he did participate in the selection process during the 1851-52 academic year. The first part of the examination asked candidates to compose a fugue on a given subject, and Saint-Saëns was ranked first among six candidates selected to write a piece for chorus and orchestra. The supplied text for the “traditional cantata” was Le Retour de Virginie by Auguste Rollet, and candidates worked in seclusion on this second section from 26 June to 21 July. When the results were announced on 7 August, Léonce Cohen and Ferdinand Poise took the first and second prizes, with Saint-Saëns remaining unplaced. When Saint-Saëns looked over his score in 1894, he exclaimed: “What an absurd libretto! What poor, even ridiculous verse! But I say that without any intention of defending my work, which was not up to much… In short, I obtained nothing, not even a pass, which they could have given as a consolation, considering I was so young and, all things considered, my writing of the orchestral part was adequate.” 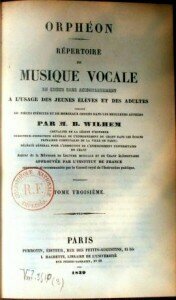 Saint-Saëns composed his first “mélodie” at the age of 5 in 1841, and his last in May 1921. In between he composed more than 150 mélodies that reflect his insatiable curiosity and eclecticism in terms of authors, texts, subjects, and the way he sets them to music. These gems “illustrate his harmonic experiments, his attachment to the French language and his intimate relationship with poetry.” Inspired by the poet and dramatist Georges Docquois, Saint-Saëns produced his second cycle, La cendre rouge (Red Ashes) in 1914. Adding the subtitle ”Ten lyric poems for voice and piano,” the composer told his publisher Jacques Durand, “My new mélodies aren’t very melodic; they’re unlike what I’ve written previously or what others write; I don’t know if people will enjoy them, but I enjoyed writing them.” In the event, the upheavals of the Great War delayed publication until January 1915, and it also explains the general neglect of the work by posterity.

Camille Saint-Saëns: La cendre rouge, Op. 146
Throughout his long and industrious career, Saint-Saëns wrote partsongs for assorted vocal combinations. Official organizers turned to him for pieces glorifying the nation and Republican values, or commemorating the heroes of French culture like Corneille or Victor Hugo. Rather frequently, these scores are so closely tied to their original purpose that they have limited relevance to today’s audience. However, Saint-Saëns’s large and small-scale choral works in both sacred and secular genres, are worth exploring. Scholars have suggested that his contributions to this repertory “show his lyricism, masterful command of sonority, craftsmanship and clarity of form, and, in so many instances, a beauty and humor that is truly French.”