Camille Saint-Saëns was not a deeply religious man, and he certainly had “a repugnance for religious ceremonies.” On one occasion he even made arrangements for someone else to represent him at a baptism service where he was to become a godfather. Yet, he nevertheless composed well over sixty sacred vocal works, ranging from motets to masses and oratorios. Among his more expansive efforts is the Messe de Requiem of 1878. When his wealthy friend and admirer Albert Libon passed away, he left Saint-Saëns 100,000 francs in his will, “intended to release him from the servitude of the organ at the Madeleine and permit him to devote himself entirely to composing music.” Originally, that will also included the condition that Saint-Saëns should compose a requiem mass to be performed on the first anniversary of Libon’s death. Although Libon eventually deleted this condition, Saint-Saëns’ sense of gratitude urged him to compose the work in just eight days. Two days after the anniversary of Libon’s death, Saint-Saëns conducted the first performance at the Church of Saint-Sulpice on 22 May 1878, with Charles-Marie Widor as the organist and vocal soloists from the Paris Opéra. 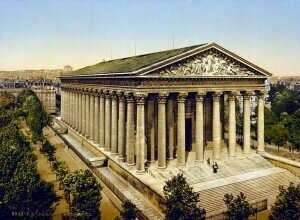 Maybe Saint-Saëns had tempted fate by composing the Requiem, as only six days later on 28 May, his two-and-a half-year old son André fell to his death from a high story window. And barely 2 weeks later, his six-month-old son Jean died in the crib on 7 July. Saint-Saëns was devastated, and these tragic events also caused the breakdown of his marriage. Between 1853 and 1877, Saint-Saëns was an employee of the French Roman Catholic Church, an employment, which he took very seriously. During this period of the Second Empire, church music did not adhere to a strictly unified style, but stylistic diversity of religious art was all the rage. This was particularly true of the Church of the Madeleine where Saint-Saëns was organist. It was the parish of the most fashionable society of the day, and it became a musical theatre for important weddings and funerals. As such, Saint-Saëns composed music tailored for specific occasions, including the motet Deus Abraham for the funeral of Admiral Courbet.

Interior of the Madeleine

Saint-Saëns was an atheist, but he was no fool! He clearly understood that his skills as an organist would eventually lead to church appointments, and that he would have to compose some church music. And as it turns out, he seemed rather comfortable writing religious music. During his student days at the Paris Conservatoire, Saint-Saëns apparently entered a church music competition in Bordeaux, contributing a complete setting of a mass. His Mass Op. 4 did not win any prizes, but when he later recycled it for use in Paris, it attracted the attention of Franz Liszt. “It is like a magnificent Gothic Cathedral,” Liszt writes, “in which Bach would conduct his orchestra.” Liszt’s reference to Bach is very apropos, as Saint-Saëns heavily drew on tradition in his choral works. He strongly believed that his models should be Handel, Mendelssohn and other masters of the genre. It’s hardly surprising that Saint-Saëns’ “old-fashioned” approach earned him a reputation as a “severe and austere musician.”

Camille Saint-Saëns: Mass, Op. 4
The text of the hymn “Ave Verum” dates from the 14th century and centers on the real presence of the Body of Christ during the Eucharist, the sacrament commemorating the Last Supper. Offering the faithful a foretaste of the heavenly banquet to come, a great number of composers have been inspired to compose musical setting. Believe it or not, Saint-Saëns composed six settings on this particular text alone! Probably the two most memorable settings date from Saint-Saëns’ tenure at the École Niedermeyer, an institution founded in 1853 with the aim of raising the standards of church music. The Ave Verum in E flat major for SATB choir was published in 1865, the same year as another setting that he had written for soprano, alto and organ. His “Ave Verum” catalogue also includes a setting in D major for female voice in four parts with horn obbligato, as well as three solo settings.