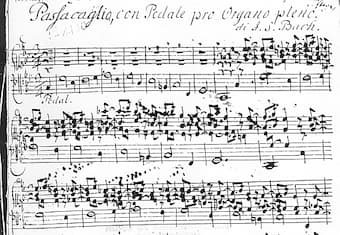 When I was a little girl, my parents took me to the Cathedral in Hong Kong. I just loved that huge space that seemed to have so many memories. But what was really fascinating was the fact that it was so quiet and peaceful. That all changed when the big pipe organ roared to life. The music was just marvelous, and it all seemed the same yet so incredibly different. Only much later did I understand that the organist on that day had played the Bach “Passacaglia and Fugue” in C minor.

That particular key is described as “obscure and sad,” and “suitable for tenderness.” Others have described C minor as “a declaration of love and at the same time the lament of unhappy love… longing and sighing of the lovesick soul lies in this key.” I am not sure I felt any of these emotions on that day, but clearly there was a sense of longing, sadness and passionate intensity. One writer even describes C minor as the key “for the super natural.” We can’t be sure that Bach was thinking of these attributes, but his “Passacaglia and Fugue” is without doubt one of the best songs in the key of C minor. 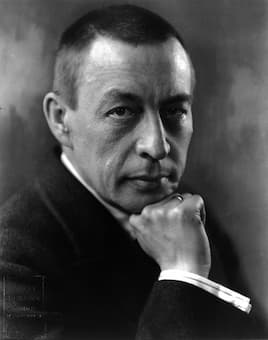 Sergei Rachmaninoff, for the first decade of the 20th century, was the superstar of the piano circuit. Devoted fans camped outside his house to catch a glimpse of their idol, and some would follow him from city to city to see him perform on stage. Some overly excited fans even hid in his dressing room, and Rachmaninoff’s manager had to regularly evict them. When Rachmaninoff needed a bit of peace and quiet, he lodged at the famous “Garden of Allah” hotel in West Hollywood, California. 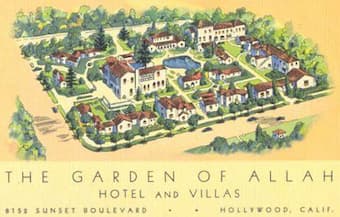 The establishment catered to both short-term and long-term guests, and it gained a reputation as a place where the famous could enjoy living in a quaint, cozy, village-like setting. Frequent guests included the writer F. Scott Fitzgerald, the actor Robert Benchley, Greta Garbo and later-to-be president Ronald Reagan. It was also a favorite residence for musicians, including Igor Stravinsky, Jascha Heifetz and Sergei Rachmaninoff. In this unconventional hotel, which was actually described as “notorious,” Rachmaninoff was shielded from tourist and autograph seekers. The composer was clearly unhappy in the glitzy world of musical superstardom, and instead preferred to express his emotions in music. His 2nd piano concerto is scored in C minor, and it is one of the best touching and most popular concertos of all time. 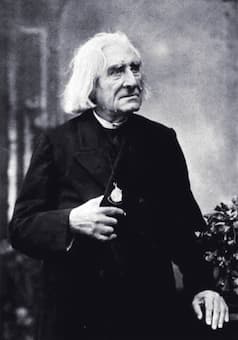 We really can’t talk about the key of C minor without mentioning Beethoven’s 5th Symphony. The famous opening has become a cliché, and you can hear it as a ringtone and in many advertisements. It clearly does not sound like the “longing and sighing of the lovesick soul,” but it is a very powerful and stormy piece of music. To me, it doesn’t sound like Beethoven was trying to provide musical entertainment, but he was looking for something much deeper. Some listeners hear a decidedly psychological dimension and also aspects of the supernatural. The only way for contemporary listeners to hear this and other symphonies at home was to consult piano transcriptions. And Franz Liszt transcribed all 9 Beethoven symphonies. Vladimir Horowitz considers them among “the greatest works for the piano.” Horowitz explains, “I don’t like the sound of a piano as a piano, but I want to imitate the orchestra.” Beethoven’s 5th symphony transcribed by Liszt and performed Glenn Gould is without doubt one of the best songs in C minor. 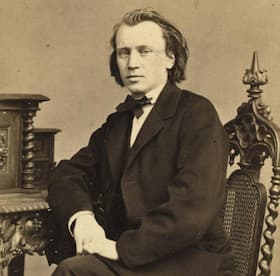 Beethoven clearly liked the key of C minor, and so did his heir apparent Johannes Brahms. Brahms was terribly shy in his younger years, and he acutely felt the paralyzing shadow of Beethoven. As he wrote to a friend, “it is horribly difficult to compose anything with Beethoven standing on my shoulders.” Maybe that’s why it took Brahms almost 20 years before he published his 1st Symphony. Brahms kept consulting Clara Schumann, and he did not only get positive feedback. In 1862 she writes, “the music is rather tough, but I soon got used to it.” It wasn’t the most glowing endorsement, and Brahms kept revising and revising and sending short drafts of various movements to Clara. In 1868, Brahms was stuck for good. He stopped working on the symphony completely, and only returned to it fourteen years later. Finally, in the summer of 1876 all pieces of this difficult symphonic puzzle were in place, and when it premiered on 4 November 1876 in Karlsruhe, the conductor Hans von Bülow referred to the work as “Beethoven’s Tenth.” Did I already mention that this symphony is in C minor? It is a marvelous composition, and one of my favourite songs in that particular key. 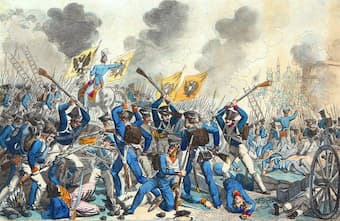 I am very surprised that the key of C minor is not more frequently associated with a rebellious or revolutionary character. Why am I surprised? It’s because my favorite etude by Frédéric Chopin carries the subtitle “Revolutionary.” It was written around the same time as the November Uprising in 1831. Once Poland’s revolution against Russia had failed, Chopin cried out, “All this has caused me much pain. Who could have foreseen it?” It is a very powerful and stirring piece, and it is dedicated to his “friend Franz Liszt.” From the powerful opening chord to the passionate conclusion, it is an outpouring of emotion. Chopin probably knew that Beethoven reserved the key of C minor for his stormiest compositions, and he probably expressed this sentiment in his “Revolutionary Etude.” Now you know my favourite and best songs in the key of C minor, what are yours?