Composers Love
Theodor Leschetizky: For the Love of 4 Students
by Georg Predota May 27th, 2019
Tags: Leschetizky 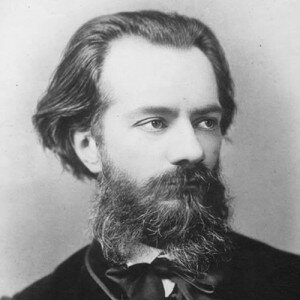 Theodor Leschetizky’s (1830-1915) unbelievable teaching career lasted the better part of 75 years! It is said that in excess of 1200 eager piano students passed through his studio, and that included piano superstars Schnabel, Gabrilovich, Friedman, Moiseiwitch, Yesipova, Vengerova, and countless others. At the height of his fame Leschetizky employed four assistants, and concerning the fabled “Leschetizky Method” he once said, “I teach exactly as Czerny taught me; I have added nothing, changed nothing.” Apparently, this included “walking for hours alone in the night. I look far down the street, Leschetizky remarked, “and imagine a beautiful voice, and I learn that far away pianissimo quality that means attention.” For Leschetizky, according to Paderewski, “the best study was done away from the piano… Listening to the inward singing of a phrase was of far more value than playing it a dozen times.” Let it not be said that teachers don’t learn from their students. Leschetizky’s appreciation for melodic smoothness and beauty was greatly inspired by the singing of his private piano student Anne de Friedebourg, whom he married in Russia. 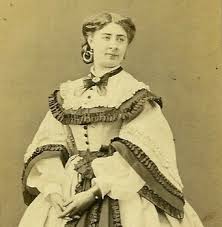 Theodor Leschetizky: 6 Meditations (Livre 1), Op. 19
Anne de Friedebourg had actually been proposed to by the pianist Anton Rubinstein, but she had agreed to await his return from a concert tour before accepting his offer. Rubinstein’s concert tour apparently took a long time, as “I set myself the fundamental aim of trying to secure a more brilliant position than I could have offered to Friedebourg previously,” Rubinstein writes. In the event, de Friedebourg got tired of waiting around and agreed to marry Leschetizky. Rubinstein was not particularly upset, as he writes, “This is, of course, the best thing she could have done. I congratulate her with all my heart and I am grateful that she has thereby lightened my load, since henceforth I shall have to work for myself, which is easier than working for two.” But it wasn’t all that long after his marriage to de Friedebourg that Leschetizky started lessons with one of his most brilliant students. 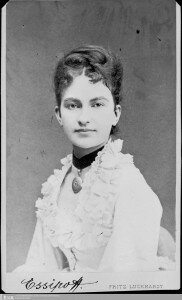 Anna Yesipova—and there must be at least half a dozen different ways of spelling her name—learned her craft in the Leschetizky studio and made her official debut in Saint Petersburg in 1871. Critics unanimously praised her effortless virtuosity and singing tone, and both Tchaikovsky and Liszt were mightily impressed. 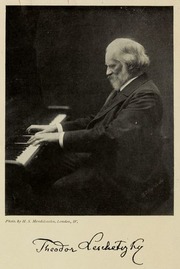 Anna had an extraordinary gift for music, and after having heard a concert at age 7, she went home and reproduced the entire program from memory. She also had a beautiful voice, and her father was trying to nudge her into a singing career. As a result, she only started serious piano lessons at the St. Petersburg Conservatory at age 13. It was Leschetizky who first noticed Anna’s talent, and after hearing her play at a public exam he said, “This little one is possessed, she will be a great artist if she tames her nature.” After her debut in 1871—when Tchaikovsky praised Yesipova’s impeccable technique and artistic maturity—Anna played an astonishing number of concerts in Russia and Western Europe. And in 1876 she received an invitation to perform in the United States, playing 105 concerts in 6 months. She played 37 concerts in New York alone, and given her film star looks, she quickly became a celebrity. The famed writer George Bernard Shaw wrote after hearing one of her concerts that “her cold disdain for difficulties, the incredible fluency of her fingers, her graceful and haste-free manner of playing, devoid of sentimentality—all that commanded admiration.” And as you might have guessed, in 1880 she agreed to become the second wife of Theodore Leschetizky.

The couple had two children, but married life was not for the faint hearted. Both parties were incredibly strong willed, and Yesipova was clearly not content with merely being Leschetizky’s piano assistant. Marriage, it was said, turned Anna from a spontaneous and headstrong being into a very serious and self-preserving person. 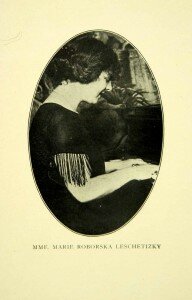 Being mentioned in the same breath with Anton and Nikolai Rubinstein, Hans von Bülow, Ignacy Paderewski, Josef Hofmann and Clara Schumann, Anna Yesipova had enough of married life and the couple divorced in 1892. She was immediately offered a professorship at the St. Petersburg Conservatory, and she counted Sergei Prokofiev, Isabelle Vengerova, Leo Ornstein, and Alexander Borovsky among her students. As for Leschetizky, he quickly married student Nr. 3, Dominirska Benislavska, and in 1908, seven years before his death in Dresden in 1915, he married student Nr. 4, Marie Roborska. In the words of Eugene d’Albert who was married six times, Leschetizky could easily be “called a monogamist!”