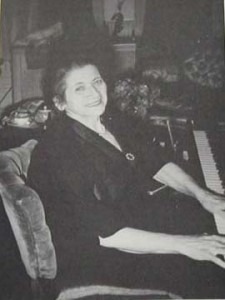 Isabelle Vengerova. Her students would wait in fearful anticipation dreading her bitingly acerbic pronouncements—to name a few—Samuel Barber, Leonard Bernstein, Lucas Foss, Gary Graffman, Abby Simon, Gilbert Kalish, Lillian Kallir and Menahem Pressler, an illustrious group of musicians, pianists and composers. Her style was abrasive. No one was spared. Prior to lessons students wanted to throw up.

One of her students, pianist Gary Graffman came to the Curtis Institute of Music at age seven in 1936 graduating ten years later, eventually becoming the director of the institute. He tells this story in his book, I Really Should Be Practicing,

“One had to have nerves of steel (which one needs anyway to perform in public) to survive her mounting concern as the date of an important concert drew near… Preparatory lessons for such an occasion, culminated during the week before the event in several marathon evening sessions of several hours, during which it became increasingly clear to Vengerova that the student was about to disgrace him or herself, her family, the Curtis Institute, music in general and (during the Second World War) all of the Allies. “Ach,” she would sigh in a calmer moment, “I must have been mistaken. Yes, it could only be that I was mistaken… In a weak moment… To think that such an imbecile as sits before me now,” her voice became stronger, healthier, “could have had even a glimmer of talent, technique (crescendo), taste, perception or (fortissimo) ANYTHING NECESSARY TO PLAY THE PIANO, or for that matter (here her voice dropped to a whisper) … Live.” 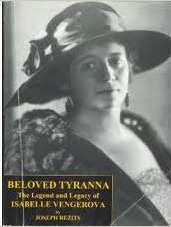 A member of Curtis’ inaugural class Samuel Barber studied voice, piano and composition ultimately penning one of the most popular pieces in the 20th century repertoire—the Adagio for Strings and some marvelous music for voice and strings such as Dover Beach.

The youngster Barber was not spared during his first lesson with Vengerova. She scowled at him and said, “Sit still! That piano stool is not a garden swing. Are you lazy, or conceited or just stupid?”

Samuel Barber
Dover Beach
Certainly there were students who could not withstand the barrage of insults. Once when a pupil decided upon criticism as a career rather than piano, her comment was, “A critic… Better he should turn to stone.” Today things have changed and intimidating or abrasive behavior is simply not tolerated in teachers or conductors for that matter.

What then, made her such an icon? 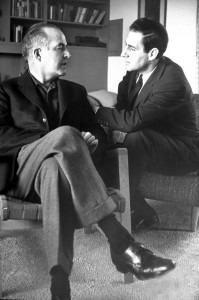 Born in Minsk, Russia in 1877 Vengerova studied in Vienna with renowned pedagogues one of whom had studied with none other than Liszt. From 1906 to 1920 she taught at the Imperial Conservatory in Saint Petersburg and after the Russian Revolution she toured the USSR and Western Europe finally coming to this country. Vengerova became a founding member of the Curtis Institute of Music in 1924, joining luminaries Leopold Stokowski, conductor, Carl Flesch, violinist, Carlos Salzedo, harpist, and Marcel Tabuteau, oboist. Later she became a professor at the Mannes College as well.

In hindsight most of Vengerova’s prodigies attest to her brilliant musical ideas, and a deep dedication to the intentions of the composers. Over the long haul many of her students were imbued with Vengerova’s unflinching artistic conscience.

The ultimate goal was to create a beautiful, refined sound on the piano, to maintain a singing line and to attain a seamless sense of legato, (connected or smooth) otherwise, she believed, piano playing could be reduced to a mere succession of notes. Vengerova emphasized playing with a free wrist, using the weight of the forearm to deeply sink into the keys to produce a full tone without a trace of harshness. This allowed students to play with more freedom, facility, and ease. She had an intense ability to concentrate so even the slightest nuances didn’t escape her attention. She never allowed her students to get away with imperfections. Patience, consistency, brutally honest self-criticism and the utmost dedication were a requirement and I’d say important values for any musician. 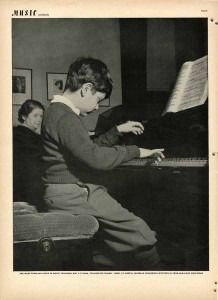 Vengerova was not just a disciplinarian. She had profound insight into the music.
Bernstein, who coined the nickname Beloved Tyranna, appreciated that she never taught technique in a vacuum. Technique was viewed as part of the interpretation and expression. Abilities grew from the musical values instilled, not the other way around.

Looking back Barber was to say, “I began to study with her at age fourteen and I often think that she taught me—through the piano—more about singing than my singing teacher, or more about the construction of a phrase or a movement than my composition teacher… Studying piano with Madame Vengerova was not simply to study with a great teacher. One entered into a lifelong love affair with the piano… later as I grew older I could appreciate her loyal friendship, and her warm wit and irony.” (From the obituary by Jay S. Harrison published in 1956 by the New York Herald Tribune.)

There is a fascinating book entitled, Beloved Tyranna, The Legend and Legacy of Isabelle Vengerova (by Dr. Joseph Rezits, Professor Emeritus of Music, Indiana University.)

Gary Graffman, wrote the foreword describing Vengerova, his teacher, as “the passionate, dedicated, colorful, mercurial genius who emerged as one of the most outstanding piano teachers of the 20th Century.” A despot, yes, but after all revered.