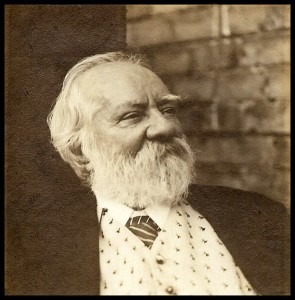 Theodor Leschetizky (1830 –1915) is a pianist who crosses wide musical and time scales. His father was a talented pianist and teacher; after his first lessons with his father, he was taken to Vienna to study with Carl Czerny. At age 11, he performed a Czerny piano concerto with Mozart’s son, Franz Xavier Wolfgang Mozart, conducting, thus linking the classical period, the romantic period, and, eventually, the 20th century together.

He started teaching piano at age 15 and made his name in Vienna as a teacher. He next went to St. Petersburg, Russia, where he taught in the court of Grand Duchess Yelena Pavlovna and by 1862 was found of the founders of the St. Petersburg Conservatory of Music, where he was also the head of the piano department. He returned to Vienna in 1878 where his students were some of the leading pianists of the late 19th century, including Ignacy Jan Paderewski, Artur Schnabel, Benno Moiseiwitsch, Ossip Gabrilowitsch, Paul Wittgenstein, and Isabelle Vengerova.

In addition to teaching, he was also a composer, writing works that were both lyrical and technically difficult. One of the most interesting of these works is the paraphrase of sextet “Chi me frena in tal momento” from Donizetti’s Lucia di Lammermoor – but limiting the performance to be done with the left hand. Listen how the arpeggio accompaniment grows over the piece, eventually encompassing the entire keyboard.

Leschetizky: Andante Finale for the Left Hand, Op. 13 (Paraphrase on Lucia di Lammermoor by Donizetti) (Peter Ritzen, piano)
Doing a musical paraphrase was one of the great musical tricks of the romantic period, as it enabled the performer to take a great piece of music and, through making his own additions, make it even greater, or more difficult, or more showy. When we compare this early work with one of his last works, we can hear the influence of the new century, dare we even say the influence of Debussy on this work?

Leschetizky: 3 Pieces, Op. 48: No. 2: Intermezzo scherzando (Peter Ritzen, piano)
Although Leschetizky died in 1915, we are fortunate that some of his performances were recorded on the Welte-Mignon piano. The Welte-Mignon automatically replayed the tempo, phrasing, dynamics and pedalling of a particular performance, and not just the notes of the music (according to its brochure). In this 1906 recording, the piano rolls are realized on a ‘Welte Vorsetzer,’ which was a ‘push-up’ player piano: instead of using a piano, this keyboard-less player was pushed up to piano and ‘played’ the keys.

As a piano teacher, Leschetizky’s influence cannot be understated: his technical abilities were transmitted to his students and they went on to pass them to their their own students. That we can listen to performances today of a heritage that extends back to the 18th century is truly remarkable.