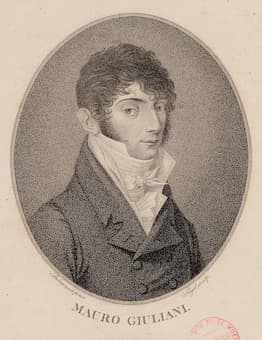 Italian cellist Mauro Giuliani (1781-1829) made his home in Vienna in 1806. In 1813 he played in the famous performance of Beethoven’s Seventh Symphony during a gala event, which saw the participation of many of Vienna’s most celebrated musicians, including Hummel, Spohr, Salieri, Meyerbeer and Moscheles. However, Giuliani became most famous as a guitar virtuoso, defining a new role for the instrument in the context of European music. A contemporary critic wrote, “Giuliani’s vocalized his adagios to a degree impossible to be imagined by those who never heard him; his melody in slow movements was no longer like the short, unavoidable staccato of the piano, requiring profusion of harmony to cover the deficient suspension of notes, but it was invested with a character, not only sustained and penetrating, but of so earnest and pathetic a description as to make it appear the natural characteristic of the instrument.” Giuliani was a pioneer in the development of the guitar. He was the first guitar virtuoso of his generation and the first to write guitar music in modern guitar notation. His legacy includes roughly 150 works including a Fantasia on “The Last Rose of Summer.” 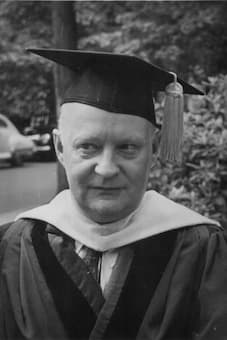 Vocal compositions, not only choral works but also lieder, form a surprisingly large part of Paul Hindemith’s (1895-1963) creative output. The variety of texts in his early lieder is frequently related to expressionistic paintings, and musically features a number of experimental traits. He strives towards a terse strictness that makes use of colorful timbres that often obscure the contours. Determined to overcome boundaries, Hindemith writes to his publishers, “I used to not be able to write like this because I was technically and humanly too undeveloped.” A final eruptive outpouring in the area of his Lied production took place during his time in American exile. Hindemith now turned to English, French and Latin texts with the choice of language determining the character of the individual setting. He succeeds in picking up the subtlety of the underlying texts and in transforming them into music. In his melancholy reflection “On hearing the last rose of summer,” Hindemith delves into a new musical dimension by “developing his Lied within the field of tension between subjective lyrical sound and a binding musical system.” 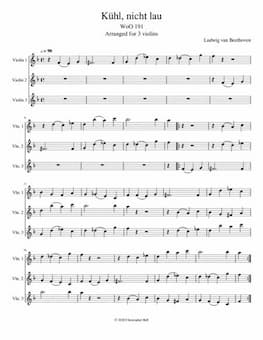 Friedrich Kuhlau (1786-1832) left Hamburg in 1810 to escape the Napoleonic wars, and eventually took Danish citizenship. He was appointed court composer in Copenhagen in 1818 and played a major part in the establishment of Danish national opera. Beethoven was his musical idol, and in late summer of 1825 Kuhlau spent time in Vienna. He became a friend and drinking buddy of Beethoven, and accompanied by the publisher Haslinger and the violinist Holz, the two composers went on a Vienna pub-crawl. On that occasion, Kuhlau improvised a canon named “B-a-c-h” and Beethoven responded with the canon “Kühl, nicht lau” (cold not tepid) of his own. 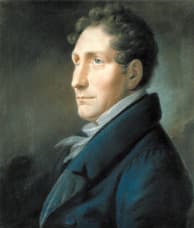 Beethoven was apparently in a rare jovial mood and still sober enough to allude to Kuhlau’s surname. Kuhlau was primarily known as a concert pianist and he introduced many Beethoven works to Copenhagen audiences. Besides piano music, Kuhlau wrote five operas and a lot of chamber music, showing a particular fondness for the flute. His favorite instruments feature prominently in the delightful variations on “The Last Rose of Summer.” 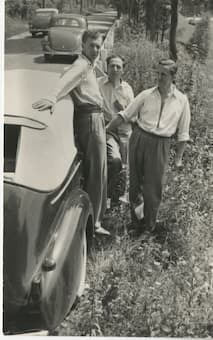 To conclude this little series on “The Last Rose of Summer,” let’s listen to an arrangement by Benjamin Britten. His folk-song arrangements carry a sense of nostalgia throughout. The first set of songs from the British Isles was published in 1943, but a good many of theses arrangements were made during Britten’s time in America. Additional sets were issued in 1946 and 1947, but a fourth volume devoted to a group of Moore’s Irish Melodies only emerged in 1960. The familiar tune “The last rose of summer” features long phrases and completely lacks rhythmic motion in the accompaniment. Britten significantly alters the known melody, and the accompaniment features nostalgic harp-like arpeggiation throughout. It’s a clear nod to the original presentation of the tune by harper Denis Hempson at the Belfast Harp Festival. In this recording, the piano accompaniment is arranged to be played by the harp.