In Tune Arts
The Classical Age in Music and the Arts
by Ursula Rehn Wolfman July 12th, 2011 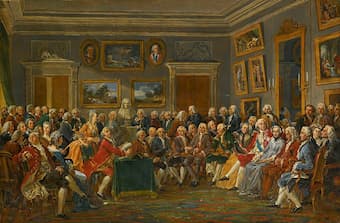 Reading of Voltaire’s tragedy of the Orphan of China in the salon
of Marie Thérèse Rodet Geoffrin, by Lemonnier © Wikipedia

In the middle of the 18th century the last shadows of the Baroque faded into the more intimate, colorful and pastoral Rococo period. All of the art forms, particularly those in painting and music, emphasize the “artificial” disguised as the “natural”. But the 18th century saw a new philosophy begin to emerge in Germany, England and France – ‘The Age of the Enlightenment’ – with the writings of Burke, Paine and Hume, Kant, Hegel and Goethe, Rousseau, Voltaire and Diderot, just to name a few. This new ‘Age of Reason’ influenced all subsequent artistic representation, including Classical music. The history of classical music is tied to this reexamination of the Classical period in all art forms.

One primary aspect of interest in the new Age was its fascination with and absorption of the artist theory and practice of its ancient historical antecedents. The excavations of Pompeii, Herculaneum and the ancient Greek settlements in Asia Minor, as well as the Napoleonic revival of the ideals and scope of the Roman Empire, all nourished an international current of imitation of classicism: ‘Neo-Classicism’. Classical Period music has links to these looks backward. 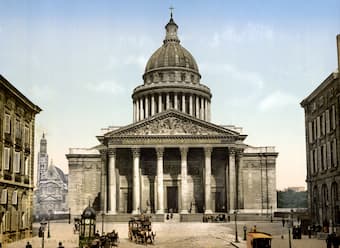 The influence of Greek and Roman temples was particularly dominant in the design of public buildings (in Berlin, the Greek revival buildings Karl Schinkel; in France, the Panthéon and Invalides, and in the United States, the Capitol and President Jefferson’s design for Monticello and the University of Virginia). These structures deliberately reintroduced the classical proportions of the Greek orders, the Doric, Ionic and Corinthian, but, in contrast to the Baroque, used them for architectural strength rather than ornamentation. The order, balance, structure and harmony reflected in these buildings’ architecture became themes broadly used within all artistic expression. 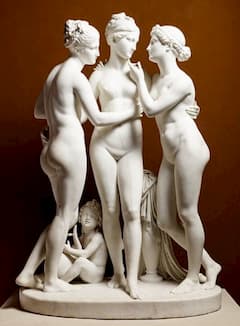 Cupid and the Three Graces by Bertel Thorvaldsen
© life-imitates-art-far-more.tumblr.com

In sculpture, for example, figures would again imitate their Roman and Greek models – here Thorvaldson’s Three Graces, shows the figures enclosed in the ‘Classical triangle’ – a measured space which totally contains them. 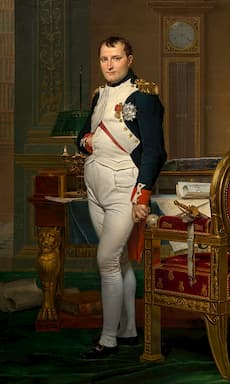 In painting, Jacques-Louis David’s Napoléon, considers the canvas itself again, as Renaissance painters did, treating it as a surface which could be divided into mathematical proportions. The figure of Napoleon is encompassed in the center of the canvas in the classical pyramid. Every aspect of the painting is then used as a text, which the viewer can “read”. The clock in the background reads 4:15 a.m., the candles have burned low – Napoleon is working at this late hour for the good of his people (the ‘Code Napoléon’ on the desk); a book with the Fleur de Lys symbolizes his link to the French dynasty; the Bee on the Empire style chair is a reference to Charlemagne and the Carolingian dynasty of ninth century France. The books and maps on the floor are all references to Roman classical writers, such as Petrarch, and are intended to glorify Napoleon’s skill as military strategist. The light in the painting is evenly distributed, contrary to what was seen during the Baroque period, where it contributed to tension, emphasizing shade and light, the ‘seen’ and the ‘unseen’, and the brush work is not visible. The main purpose of the painting is to convey information, to tell a story, and not to refer to itself as a painting, a practice which begins to change with subsequent developments in Romanticism and Impressionism. 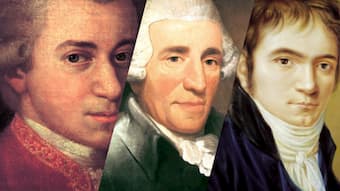 The music of the Classical period, particularly in the works of Haydn, Mozart and the young Beethoven can, like the paintings of the time, be seen as an exercise in harmony, order, balance and structure. The twenty-four hour rule, the unity of time, action and space, (discussed in my previous article on Renaissance art), was still in effect in opera and theatre. In Mozart’s opera “The Abduction from the Seraglio”, the action starts in the evening with the abduction and ends 24 hours later with the celebration banquet.

Architectural thinking became the greatest concern of these composers. Whereas contrast is the essence of Classical music – a contrast of dynamics, music shifting back and forth from forte to piano– the contrast of register with wide-ranging melodies and wide spaces between base and soprano – the contrast of mood, even within one movement of a work, the Classical style of music is always conceived as an architectural entity. Compositions have many starts and stops, but all fit together in a beautiful ‘ensemble’. The movements within a composition alternate between one short phrase with another, one entire section with another section – all perfected in the architectural concepts of the Sonata form. Enlightenment composers developed and utilized new instruments and musical combinations, small wind ensembles, oboe, clarinets, horns and bassoons, divertimenti and serenades. With Haydn, the string quartet came of age, using two violins, viola and cello, with composers assigning important roles to all four instruments.

Another important musical change in the Classical period was the newly invented piano forte, which replaced the harpsichord in the last two decades of the 18th century. Since the harpsichord had no pedals, it possessed a constant sound, whereas the piano could be played powerfully or softly with the loudness varying from note to note, shaping the musical phrase. The skill of the individual performer could be appreciated in his use of flittering runs and arpeggios, which now also set him apart from the orchestra.

In the pre-Enlightenment era, the harpsichord had been an instrument perfectly suited for the intimate salons of the aristocracy. The sound of the piano, however, could fill large concert halls, attended not only by the court, but also by the bourgeoisie. After the French Revolution in 1789, composers and artists who had worked exclusively for the aristocracy, kings and emperors, now worked independently and had to find their own support (Mozart and Beethoven, just as an example).

The beginning of the 19th century saw a complete change in artistic endeavors, which the great composers, Haydn and Mozart anticipated in their late works. Beethoven, of course, would take this further in the years to come, which will be the subject of our next article.