In Tune Arts
The Romantic Age in Music and the Arts
by Ursula Rehn Wolfman August 15th, 2011 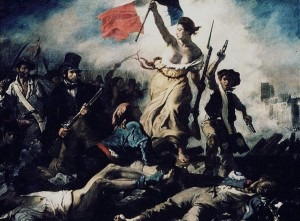 The events during and following the French Revolution in 1789 represented not only a complete change in the political system, but also a profound upheaval in the arts in France and, subsequently throughout Europe. All of the rules established and accepted until that time were rewritten, revolutionized. The European 19th century, in fact, would become a century of revolutions, both political and aesthetic.

In 1830, on the opening night of Victor Hugo’s romantic drama, ‘Hernani’, pitted ‘les ancients’ against ‘les modernes’, the Classicists against the Romantics. The Romantics were led by Théophile Gautier, Gérard de Nerval and Hector Berlioz, and the battle at the theatre became known in France as “La Bataille d’Hernani” – The Battle of Hernani. Victor Hugo broke all of the rules, the rules of diction, as well as the concept of unity of time, action and space – the 24 hour rule. The play did not use the classical structure of ‘alexandrins’ (12 meter verse) favored by earlier writers such as Racine, Corneille and Molière, but instead modernized the content by requiring the actors to express themselves in a more natural form of speech. Hugo’s groundbreaking production, unconstrained by the 24 hour rule, takes place in different locals across Spain and France, spanning over months and years. 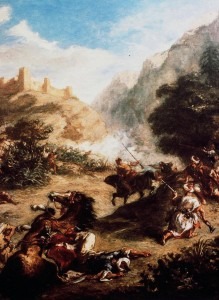 Delacroix: Arabs Skirmishing in the Mountains

In painting, Eugène Delacroix in ‘Liberty Leading the People’ and ‘Arabs Skirmaging in the Mountains’abandoned the use of the classical triangle, which had centered the composition since the Renaissance. The action in the painting takes place on the diagonal axis, i.e. showing fallen horses and riders in the foreground and then moving in a continuous diagonal to the castle in the background. The frame in both paintings no longer contains the action, but instead cuts it off and therefore establishes the canvas as a painted surface, artificially contained within the frame. The brushstroke, invisible in the paintings in Classical tradition, began to become visible, again emphasizing the fact that the canvas is a painted surface. In ‘Liberty’, Delacroix appears himself as a character in the action (the man with a gun next to Liberty). He also uses his friends as models in depicting the fallen combatants at Liberty’s feet. The young boy wielding a musket in the background is reminiscent of ‘Gavroche’, one of the protagonists and symbols of the struggle for freedom in Victor Hugo’s epic ‘Les Misérables’. Clearly, Delacroix’ deliberate inclusion of the iconic figure serves as an example of the close relationship between artists and literary figures of the day.

In music, the central figure of the era was Ludwig van Beethoven, whose genius spanned from the Classical Age (Minuet in G) to the Romantic period (Moonlight Piano Sonata, No. 14, C sharp minor). The Moonlight Sonata is a wonderful evocation of emotions – the opening adagio is a movement of magical evocative powers and the stormy mood continues through to the last movement, a true rendition of the Romantic spirit. 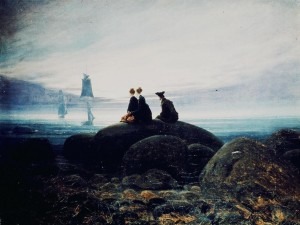 Carl Maria von Weber’s opera “Der Freischűtz” is considered one of the first ‘truly’ romantic operas, and had an enormous influence on Mendelssohn, Berlioz, Liszt and Wagner. The typical ‘Romantic’ themes, forest scenes, nature in music, changing moods, folklore elements alter with passionate episodes set in the realm of the fantastic (which also explains the success of Goethe’s ‘Faust’ , replicated in music by Hector Berlioz’ ‘Damnation of Faust’). In Weber’s opera, the clarinets and horns provide a specific forest timbre, while the strings, later supported by the bass, provide the musical framework for the story, taking us from the initial somber mood set to a highly dramatic climax. Demonic powers, represented by the interaction of selected instruments and the varying tonality, gradually become more and more menacing until the finale’s joyful, dancing conclusion. Painting the musical expression of a concrete mood painting is more important than the adherence to the conventional, musical form. Franz Schubert’s work, and in particular his ‘Winterreise’ cycle, is another example of these evocative mood sentiments.

Again, we find a direct correlation from music to the paintings of Caspar David Friedrich – here the moonlit scene of ghostly ships gliding by in the background, watched by three figures, with their back to us, pulling us into the painting and making the viewers direct participants in the silent nighttime scene. 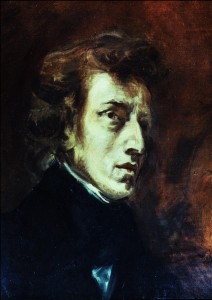 Portrait of Chopin by Delacroix

In fact, it is the close friendship between the painter, Eugène Delacroix, and the great Romantic composer, Frédéric Chopin that brings the intimate relationship between painting and music even more into focus. Delacroix had a piano moved into his painting studio, so that Chopin could work and play in his company. Just as Delacroix’ work reflected the revolutionary fervor of his time, the same can be said of Chopin’s compositions. Chopin also broke loose from the rigid controls of the individual sensation, philosophically based on the new emotionalism found in the works of Jean-Jacques Rousseau. Chopin’s color sensation with rich harmonies, his bold and tender melodies, and dashing arpeggios found their counterpart in Delacroix’s use of perspective, vivid evocation of emotion and juxtaposition of strong colors.

Just as in painting, the form, the language of the music piece becomes apparent, where not melodies, but modes (minor, pianissimo) are contrasted, where the language of the opening bar dictates the character of the rest of the piece, where “a mechanical difficulty directly produces the music, its charm and its pathos” (cf. Charles Rosen, The Romantic Generation)In Baudelaire’s poem, “Les Phares” (The Lighthouses, i.e. guiding lights in painting), one of the strophes connects painting to music:

Delacroix, evil angels haunt this lake of blood,/Shadowed by the evergreen shade of firs,/Where under a stricken sky, strange trumpets calls, Fade away, like a hushed sigh of Weber.