In Tune Arts
Impressionism to Modernism in Music and the Arts
by Ursula Rehn Wolfman September 7th, 2011 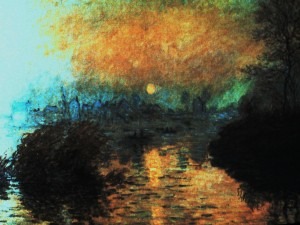 The works of the great Romantic musicians, painters and writers contributed not only to Impressionism, one of the most important artistic and cultural evolutions in the mid- 19th century, but presaged the advent of Modernism in the century following.

In 1874 a group of painters, including Monet, Pissarro, and Degas, displayed their works in the photography studio of Nadar, and entitled the exhibit as the “Salon of the Refused Painters”. At the time, paintings and sculpture were shown in the ‘official’ salon, so they could be judged, prizes awarded and, of course, sold. When seeing Claude Monet’s painting “Impression, Sunrise”, one of the critics coined the term “Impressionism”, which was then uniformly applied to the works of these painters, many of whom disapproved of the label.


We have already seen that the Romantics had started to break the rules of conventional concepts in music, painting and literature, but now, the shocked public and derisive critics were confronted with works which would question their very sense of vision and understanding to an even greater extent. None of the new works of the Impressionistic school followed the rules of classical academic painting. The classical triangle, centering the composition disappeared, brush strokes became visible, the classical perspective was put into question, and the form of the painting became apparent. 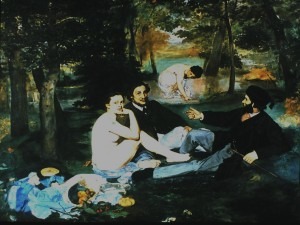 Ten years earlier, Édouard Manet, with his “Déjeuner sur l’Herbe” (Luncheon on the Grass) had met with incomprehension and severe criticism. His painting shows his favorite model, Victorine Meurent, completely nude, staring at the viewer, seated with clothed men, a still-life in the foreground, a bathing figure floating in the background too close to be correct according to classical perspective, and all of the figures bathed in a flat light without any shadows. Baudelaire called Manet “the painter of modern life”, a term, which would be applied to Baudelaire as the ‘poet’ of modern life, who broke the conventional rules in poetry, using unconventional metaphors and meters, and to Gustave Flaubert, the first modern writer, who wanted to write a book about ‘nothing’, a book which would only exist in its style. In all of the arts, their respective creative process, the materiality of the artistic language became apparent. 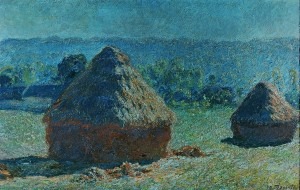 One aspect of the new artists’ emphasis on materiality was due to the availability of commercial paints, which could be purchased in tubes rather than having to be mixed in the painter’s studios. The ease of use and transport of these new materials allowed painters for the first time to work directly in nature, rather than relying on sketches and studies brought back to a workroom for the creation of a final painting. Canvasses became smaller since they had to be carried and the paint dried quicker than paints mixed by hand, so the artistic technique had to adjust to the requirements of the new medium. Therefore the more rapid brushstrokes became apparent and colors became lighter. Time and space themselves became visible, as in Monet’s series of Haystacks/Rouen Cathedral paintings, in different seasons and at different times of day. The depicted objects disappeared in a haze of color, showing now only the effect they produced. Content, meaning the traditional subject of the paintings collapsed into form, or the manner of painting itself. 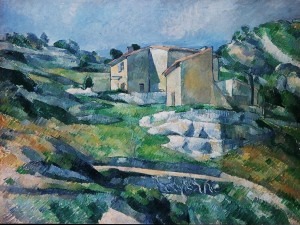 Paul Cézanne - Houses in the Provence

The flat canvas surface itself became visible, an evolution described by poet Paul Valéry as “the recovery of a long obliterated truth”, as the canvas had been hidden since the Renaissance’s concept of unity of time, action, space and the single vanishing point, which had created the illusion of three-dimensional space. In the Manet’s ‘Déjeuner’ painting, we witness for the first time the use of multiple perspectives, which Paul Cézanne would continue to explore extensively in his paintings, such as in Houses in the Provence with its carefully placed, symmetrical brush work and shadows falling in different directions. 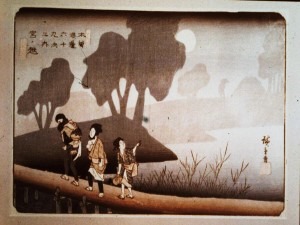 The artists at that time also became acquainted with the works by Hokusai, Hiroshige and Utamaro (many of these Japanese woodcuts were collected by Monet and can be seen in his house in Giverny). Their brilliant use of color, steep and angled views, flat pattern designs, fragmentary depiction of objects in space, always emphasize the decorative element of painting on a flat sheet of paper, which was not only a revelation to the French painters, but an affirmation of their own theories. Hokusai’s woodcut of ‘The Wave’ was used by Claude Debussy for the cover of his composition, ‘La Mer’, which brings us to the relationship between painting and music. 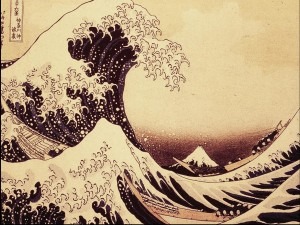 Claude Debussy heard the Javanese Gamelan at the Universal Exhibition in Paris in 1889. The Gamelan orchestra contained several sets of instruments tuned differently between each other (sets of five or seven notes to the octave), often played in pairs, which result in ‘shimmering’, overlapping sounds, where bells and reverberations in space make the space itself “visible.” Just as in painting, where the white canvas makes us aware of its presence through the absence of color, here, with notes fading into the silence of the musical space, we become aware of space itself. The Gamelan’s hetero-phonic texture, which appears in his composition ‘Pagodes’, appealed not only to Debussy and Ravel, but also to Eric Satie and many composers in the 20th century, such as Francis Poulenc, Olivier Messiaen, Pierre Boulez, Béla Bartók, John Cage and Philip Glass, just to name a few.

Debussy had previously experimented with different concepts in his musical compositions, such as the whole tone and pentatonic scale, medieval church harmonies, and Russian Orthodox choir music. He was interested in the piano sound as a ‘wash of color’, as a poetic innovation creating images with no ‘fixed’ reality, existing independently of anything concrete (Prelude to the Afternoon of a Faun – a fantasy between dream and reality). Debussy’s preludes are preludes to nothing. He developed a new vocabulary, a new grammar: he added notes to the triads, so that they sounded blurred; he used short melodic fragments and blended cords together to create new ones. He paid particular attention to the subtle rhythm and inflection of the French language (i.e. in Pelléas and Mélisande, where the action and feelings are submerged, where everything happens in the shadows).

We can see here the close connection between music and painting, both of which created a new vocabulary and an entirely new language. Century-old concepts of reality, vision and truth were eroding, leading us into the 20th century which would take this adventure even further.