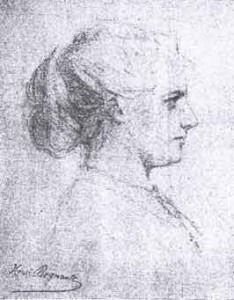 The actress Madam Félicité Saillot Desmousseaux, better remembered as the dutiful wife of César Franck (1822-1890), greeted the arrival of her husband’s Piano Quintet in F minor with public condemnation, fiery scorn and a deeply professed hatred. Surprisingly, the same reaction also befell the dedicatee of the work, the composer and pianist Camille Saint-Saëns. At the premiere performance held at the Société Nationale de Musique —an organization founded to promote French Art—Saint-Saëns sight-read the piano part. Eyewitnesses report that he was getting highly emotional and enraged during the performance, apparently discovering some secret code or covert message in the score.  Once finished, César Franck went on stage to congratulate the performers, but Saint-Saëns angrily refused to shake hands and stormed off stage, leaving behind the manuscript score dedicated to him. Even more curious is the fact that he actively discouraged all further performances of the work. Given these rather severe reactions to a piece of music, it is hardly surprising to locate an extra-musical reason for such scorching responses. And that reason was a young and beautiful private organ and composition student of César Franck’s. Augusta Holmès, so the composer reports, “arouses me in the most unspiritual desires”. Félicité clearly understood that the pervasive emotionality and infatuation expressed musically was solely intended for this “impure and seductive student”. And Saint-Saëns, together with Nikolai Rimsky-Korsakov and almost the entire male faculty of the Paris Conservatoire, was passionately in love with Augusta. In fact, Saint-Saëns had numerously proposed marriage to Holmès, but had always been sweetly ignored.

Holmès, a naturalized French composer of Irish descent was rumored to have been fathered by the celebrated novelist and poet Alfred de Vigny, who conveniently also doubled as her Godfather. Showing musical aptitude at an early age, she initially published her own compositions under the pseudonym Hermann Zenta. Franz Liszt and Richard Wagner hurriedly evaluated her musical scores, and Holmès began to enjoy popularity in the sophisticated circles of Parisian society. In fact, she began to exert a muse-like influence on her surroundings, prompting Saint-Saëns to remark “this beautiful pythoness was not satisfied with cultivating art and preaching art; she caused it to flourish all about here. As Venus fecundated the world when she knotted her tresses, so Augusta Holmès shook over us her reddish locks, and when she was prodigal with the lightning of her eyes and the brilliance of her voice, we ran to our pens, our brushes; and works were born.” For several years, she was the mistress of Catulle Mendès—husband of the poet and historical novelist Judith Gautier—and depending on what source to believe, bore him either four or five children. To the dismay of Félicité Saillot, Holmès became a private student of her husband’s in 1876. Although Franck undoubtedly admired her musical and artistic talent, he simply could not ignore “her bold beautiful features, abundant golden hair, and handsome breasts of which she was justifiably proud”. Holmès in turn, considered Frank “her real master”, and we can only assume that she was primarily referring to his compositional instructions. Be that as it may, this intimate and scarcely platonic relationship inspired Frank to publicly disclose his feelings in the Piano Quintet, prompting a critic to quip “the piano quintet is, by any measure, not quite the sound that anyone would expect to hear from the organ-loft”.