In Tune Arts
The Renaissance in Music and the Arts
by Ursula Rehn Wolfman May 13th, 2011

The idea of the Renaissance, in which language, literature, the arts and music saw a remarkable change and renewal, started gradually taking shape in the 14th century, celebrated then and later by writers, artists and musicians such as Petrarch, Boccaccio, Cola di Rienzi, Leon Battista Alberti, Leonardo da Vinci, Dufay, Monteverdi, Lasso, Palestrina, and many others. The Renaissance’s human spirit, ‘being born again’, shaped not only musical, artistic and literary production, but also laid the spiritual, intellectual and moral foundation of life well into the 19th century. 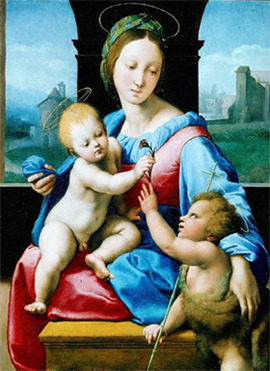 Music, according to Tinctoris, a Renaissance era theorist from the Netherlands, is a ‘nova ars’ – new art – which rejected all that had grown stale from the Middle Ages, and focused instead on infusing it with sweetness and truth (‘suavitas et veritas’). Thinkers and theorists such as Tinctoris joined Italian musicians, such as Gafori, to establish a systematic theory of composition.

During the Renaissance music became polyphonic, leaving the ‘linearity’ of the plainchant monophony of the Middle Ages. The tonic triad centers the musical composition and each voice, unrestricted, equal in freedom and authority, weaving together, creates a musical unity, seeing the work as a harmonic whole. Renaissance composers found a new relationship to language, to word and voice, to prosody and meter, and to the pictorial and emotional content of their texts. 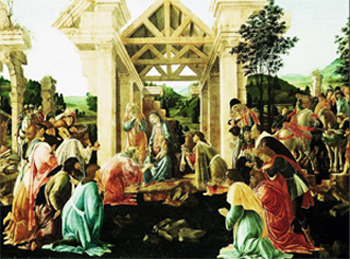 One of the most significant achievements of the time in music and painting is the transition from successive to simultaneous composition. In painting, the classical triangle (just as the tonic triad in music) centers the image on canvas. Painting during the Renaissance era abandoned the medieval superposition of narrative scenes and arrived at the central perspective, at a definite element of form from a single point of sight to the unity of time, action and space. In Botticelli’s painting, the vanishing point is centered on the Holy Family contained in the classical triangle in the center of the painting, which is set into an Italian landscape. The clothing of the Magi and their retinue (Italian courtiers) is in the style of Renaissance Italy, which was intended to demonstrate unity of time, action and space, i.e. order, balance and harmony. The light within the painting is evenly distributed, leaving nothing in the dark, nothing ‘unseen’. Painting found its depth, so that viewers of these paintings could perceive the work almost as if they were looking through a window into three-dimensional space. Painters reinforced this perspective by framing their paintings with replicated window frames to further enhance and emphasize the ‘modern’ three-dimensionality of their work.

From the Renaissance on, the day began to be measured in twenty-four hour periods, which, when applied to theatre and opera, becomes the famous “règle des 24 heures” (24 hour rule). It stipulated that all action on stage has to be started and completed within 24 hours – a rule which continued until the 19th century and was broken only by the Romantic time period.

Again, painting and music found their equivalent in the literature of the time, where protagonists find psychological depth.

In the music of the late Renaissance however, a different texture emerges, an antagonism between discant and bass begins and an entirely new sense of form emerges: a sensuous delight in color and the expression of extreme emotion replaces harmony, order and balance – the Baroque casts its shadow.