“Good for the Soul”

Israeli pianist Tal-Haim Samnon is based in Tel Aviv, and regularly performs as a concerto soloist in Israel and further afield, including with the Israel Philharmonic Orchestra conducted by Zubin Mehta. Tal recently gave his Carnegie Hall debut recital in October 2021, and regularly plays at the Schonberg Hearthouse series in Berlin, as well as in the chamber series of the Israel Philharmonic.

Away from the piano, Tal also trained as a radio presenter, and is heavily involved with composing: his piece Memory and Variations was selected to be one of the set works for the 2023 Arthur Rubinstein Piano Competition, and his arrangements of songs by Fanny Mendelssohn feature on an upcoming release, performed by Chen Reiss with Daniel Grossmann and Jewish Chamber Orchestra Munich. 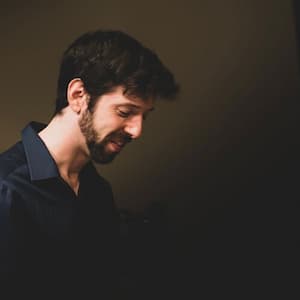 I think I really didn’t like to play the piano. My father really pushed me to do it. When I was 4 years old my teacher [an electric keyboard player] told my father I had perfect pitch, that I had good rhythm and that I had to go to a ‘real’ piano teacher.

I had three teachers in one year, until I was six years old, and I moved to the Givatayim Conservatory. My teacher there was Hannah Shalgi, and she’s the most amazing teacher. I ran from our first lesson because she screamed at me so much, but the next lesson it was ok!

When I was twelve years old, when all the maturity and hormones happened, suddenly I really started to feel lots of things. I felt like music was so beautiful, my whole body had goosebumps the whole time, and then something really happened in my soul.

I studied with [Hannah] for twelve years and when I was eighteen I [learned with] Arie Vardi. He opened my ears to the acoustics, the aesthetics, to the voicing of music. I learned six years with him in the BM School of Music and then I moved to the United States, to study at Jacobs School of Music for two years.

I then came back to Israel and learned how to present radio shows for half a year, because I really needed to take a break from music. I thought, “I’ve played for 22 years without a break,” which was a little too much for me. But then the music just called me [back], because I couldn’t disconnect. It was too strong.

Brahms loved Clara Schumann, but he never had a physical relationship with her. He was very honourable and he couldn’t do it to Schumann, even when Schumann died and Brahms and Clara were together for more than 40 years. So in his music you can really hear the sadness, the longing and dreaming for something that can’t happen.

When I was in high school I had a big love that wasn’t possible. I loved someone for three years and they didn’t love me, it was terrible. I really understand Brahms’ music very well because I think he felt something similar.

I recorded a lot of Brahms – all his miniatures, and I’m learning all his sonatas. My dream is to play all of Brahms’ pieces that he wrote. It’s a big dream for me, and I will do it! 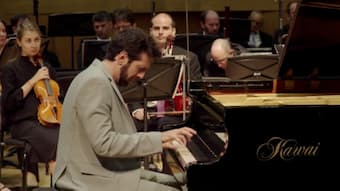 Mozart. When I was young I didn’t really understand anything. I played it and I always felt like I was doing it wrong, that something was not clear. It seemed terribly simple but it didn’t sound good. Over the last few years I understood something with its simplicity and purity, that it’s the most light and beautiful, like the sun and the stars, the most optimistic thing. When I play it I feel that nothing is the matter, that life is beautiful and we should not be sad.

We have some very special dynamics in our souls – we always need new things or to refresh ourselves. Each summer I do a big hike somewhere. I go between 150 and 200 kilometers, in the summer. This is the meditation, the cure to the intensity of the music, the intensity of the life [when you] play ten hours a day every day. I’ve been hiking in Norway, Switzerland, Georgia, Italy, India… It’s very important for the soul.