Most musicians don’t know a lot about Fanny Mendelssohn besides the fact that she was Felix’s uber-talented older sister. But she was a hugely important musical figure in her own right.

We look at thirteen facts you (probably) didn’t know about the life and career of Fanny Mendelssohn Hensel. 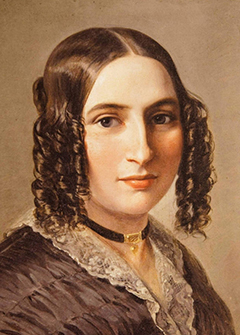 1. Her mother Lea knew from the day Fanny was born that she was fated to be a pianist, delightedly describing her newborn’s “Bach fugal fingers.” Lea herself was a keyboard player who had studied under a student of Bach’s. Lea was right about her daughter. In 1819, at the age of fourteen, Fanny played The Well-Tempered Clavier by memory for her father as a birthday present.

2. Despite their comparable musical talent, Felix was encouraged more than Fanny growing up. When Fanny was fourteen and Felix was ten, an aunt sent them gifts from Paris: Fanny received a necklace of Scottish jewels, while Felix got writing implements to compose his first opera with. Their father famously wrote to Fanny, “Music will perhaps become his profession, whilst for you it can and must only be an ornament, never the root of your being and doing.”

3. In early 1821, she fell in love with an artist named Wilhelm Hensel. Her family was hesitant to approve of the match because of the age difference (she was sixteen; he was twenty-seven). But after the passage of seven years, Hensel finally got permission to propose. Interestingly, he made it clear that her “unlimited practice” of music was to be a precondition of their marriage.

4. She wrote her own music for her wedding the night before the ceremony. Felix had never gotten around to doing it for her, as he’d promised he’d do.

5. She named her son Sebastian Ludwig Felix Hensel after her three favorite composers: Bach, Beethoven…and her brother. Sebastian would be her only child. 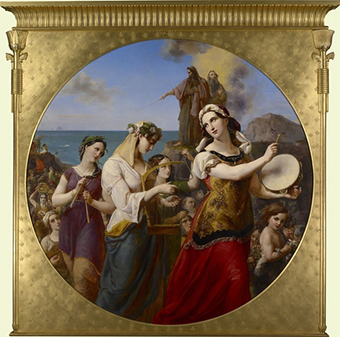 6. Wilhelm Hensel used her as a model for a famous painting depicting Miriam, a Biblical figure often used to represent the art of music. In 1838 Queen Victoria met Hensel, saw the painting, and commented on Miriam’s beauty. Hensel eventually presented the painting to the queen, and in return she gave the Hensels a diamond and emerald ring.

7. While Felix visited Queen Victoria, he had an awkward encounter with her, thanks to Fanny’s genius. Victoria singled out one of his songs for praise, and he was forced to admit that he hadn’t actually written it: Fanny had. Turns out that, unbeknownst to the public, Fanny had secretly published several works under Felix’s name!

8. Her 1829 Easter Sonata was also originally attributed to her brother. When the manuscript was discovered in 1970, scholars saw that it was signed “F. Mendelssohn” and automatically assumed it was a lost work of Felix’s. Later research revealed that it was, in fact, written by Fanny.

9. She became famous for the musical events she held at her salons. If her gender was going to prohibit her from playing in public, she decided she’d bring the audience into her home. 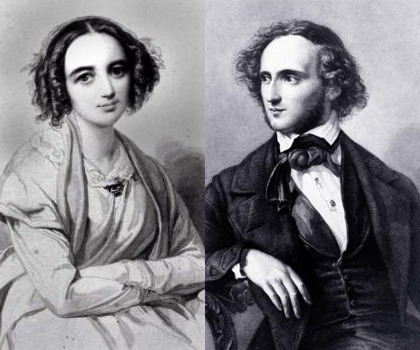 10. She was a conductor. One of the benefits of giving concerts in her home was that she could take on any musical role or responsibility she wanted. She once wrote to Felix, “Mother has certainly told you about the…orchestra on Saturday and how I stood up there with a baton in my hand… Had I not been so horribly shy, and embarrassed with every stroke, I would’ve been able to conduct reasonably well.”

11. At the age of 40 she finally decided to go against her brother’s wishes and to start publishing music under her own name. She wrote a fretful letter to Felix informing him of her plans: “Actually I wouldn’t expect you to read this rubbish now, busy as you are, if I didn’t have to tell you something. But since I know from the start that you won’t like it, it’s a bit awkward to get under way. So laugh at me or not, as you wish: I’m afraid of my brothers at age 40, as I was of Father at age 14… In a word, I’m beginning to publish.” Unfortunately, she didn’t have much time left.

12. Her final illness was sudden. On May 14, 1847, at the age of 41, Fanny assembled a chorus at her house to rehearse a piece by Felix. She was directing from the piano when she lost sensation in her hands. This had happened before, so she took a break and rubbed her fingers with vinegar to try to get the feeling in them back. She yelled from the other room as they sang, “How beautiful it sounds!” She then had a stroke, and she died before the day was over.

13. Felix was beyond devastated at her death. He became paranoid that he’d also die young from a stroke. And five months after Fanny’s death, that’s exactly what happened.