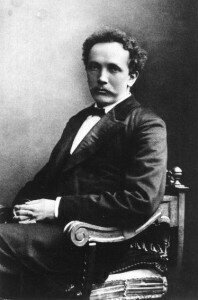 Erotic, murderous and biblical themes combine in the opera Salome by Richard Strauss (1864-1949). And as you surely know, it all climaxes in Salome’s declaration of love and kiss for the severed head of John the Baptist. Based on a play by Oscar Wilde, Strauss gave rise to a modernist voice for the stage that mirrored a European fascination with the sensual femme fatale. Salome is not merely a nubile young woman attracted to a powerful and forbidden member of the opposite sex, she is determinedly vocal and capable of extreme acts of revenge. In the end, desire and destruction go hand in hand, with her demise signaling a tribute to the increased visibility of female independence in the late 19th century. Predictably, however, the opera shocked audiences at the premiere performance in Dresden on 9 December 1905. It was clear that Salome greatly enlarged the artistic horizons of the theatrical and musical stage, but performers were reluctant to go along with the material as written. The first “Salome” Marie Wittich refused to perform the “Dance of the Seven Veils,” and a dancer had to be engaged to take her place.

Dance of Salomé, by Leopold Schmutzler

Salome gained an explosively foothold in some geographic regions, but it was banned in London by the Lord Chamberlain’s office until 1907. And Gustav Mahler unsuccessfully lobbied the censor in Vienna, with the result that the opera first played at the Vienna Staatsoper in 1918. As such, the Austrian premiere took place at the Graz Opera in 1906, with Arnold Schoenberg, Giacomo Puccini, Alban Berg and Gustav Mahler in the audience. Everybody immediately recognized that Strauss treated the subject matter and musical style in an ahistorical and highly critical fashion. Clearly, contemporary art was unable to maintain a unified mode of expression, and Strauss negotiated the worlds of art and society with a remarkable combination of detachment and irony, “juxtaposing the trivial and the sublime, and the extraordinary with the everyday.” As such, he confronted and musically addressed a fundamental issue of modernity, and Salome is one of his most idiosyncratic musical explorations and conclusions.