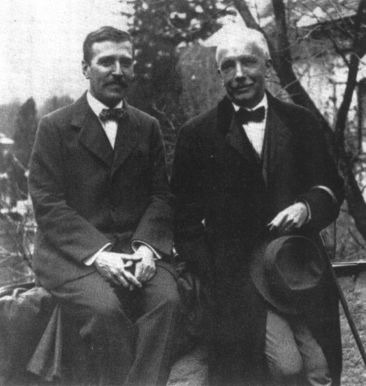 Elektra (1909), proved crucial to Strauss’s later development as a composer of opera, since it marked the beginning of his collaboration with the young Viennese poet Hugo von Hofmannsthal. This tale of multiple murder and bitter vengeance is musically and dramatically Strauss’s most successful opera, though clearly not his most popular. In terms of popularity, however, nothing comes close to Der Rosenkavalier (1911). Collaborating once more with Hofmannsthal, Strauss tuned to 18th-century Vienna and the musical world of Mozart. This comic opera presents a critical layering of musical styles, referencing Mozart, Verdi, and the waltzes—evoking a sense of sentimentality and denoting middle-class sensibilities—of Johann Strauss. “Strauss essentially discloses his modernist preoccupation with the dilemma of history, and the popularity of the score has clearly overshadowed the theatrical brilliance and modernity of the work.”

Richard Strauss: Der Rosenkavalier
“Ist ein Traum”
“Spur nur dich allein”
After the huge financial and artistic success of Der Rosenkavalier, Strauss and Hofmannsthal next collaborated on a theatrical hybrid that juxtaposes the worlds of opera seria and commedia dell’arte. An opera within an opera, Ariadne on Naxos explores the duality of comedy and tragedy, as embodied by Zerbinetta and Ariadne, and offers a complex amalgam of contrasting literary and musical styles. Richard Strauss skillfully parodies established conventions of high and low art in order to forge an entirely new relationship between composer, performer and the audience. The original version combined Molière’s play Le Bourgeois Gentilhomme (The Bourgeois Nobleman) with an opera about the Greek heroine Ariadne, staged simultaneously. The two works were linked through dialogue, characters that occur in both, and self-references about the nature of opera. The premiere took place on 25 October 1912, and received mixed reviews, as the audience was not sure whether they were watching a theatrical play or an opera. Responding to this criticism, Strauss and Hofmannsthal began a process of revision that discarded Molière’s play and replaced it with a newly composed prologue.

Richard Strauss: Ariadne auf Naxos “Großmächtige Prinzessin”
Strauss remained preoccupied with opera until 1941, when he bade farewell to the stage and returned to the instrumental musical genres of his youth. Metamorphosen, originally subtitled “a study for 23 strings,” is undoubtedly one of his most moving instrumental compositions. Supposedly, the composition was inspired by the utter destruction of Strauss’s hometown of Munich by allied bombers in 1945. Yet Strauss was not merely mourning the destruction of a city; he was probing for the causes of war itself. Prominent scholars have suggested, “Strauss inverted the classical concept of metamorphosis as a process towards divinity, and focused instead on humanity’s dangerous potential to indulge the bestial nature of humankind.” Strauss even included a telling yet painfully ironic quotation from Beethoven’s Eroica Symphony. For some prominent listeners, the Metamorphosen is possibly the saddest piece of music ever written.

Richard Strauss was one of the most versatile, creative and talented composers of his generation. Equally at ease in the concert hall, recital hall, ballet, cinema and the opera house, the composer nevertheless poses a unique challenge in modern music. For noted Strauss scholar Bryan Gilliam, “the ideal likeness of Strauss would not be a painting, drawing, or sculpture, but a mosaic, coherent from afar, but upon closer view made of numerous contrasting fragments.” Richard Strauss the composer and man juxtapose the trivial and the sublime, and the extraordinary with the everyday. The key to an understanding of his music may not be found in an attempt to reconcile or resolve these contradictions, but rather in the composer’s own musical celebration of this duality. Most importantly, Strauss recognized the inability of contemporary art to maintain a unified mode of expression, and he eagerly confronted and musically addressed this fundamental issue of modernity.