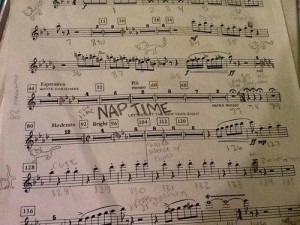 String players in an orchestra are captive. We have to sit still in our chairs no matter if the conductor is rehearsing woodwind intonation or percussion ensemble. Frequently there are entire movements where brass players are not needed. We are jealous. In rehearsal, sometimes even in concerts, they will sneak on and off the stage without anyone being the wiser. That is until a particular day. The trumpets couldn’t resist playing a prank.

Brahms: Symphony No 1 Movement 4
The orchestra was rehearsing Johannes Brahms Symphony No. 1. Brahms wrote magically, saving the famous brass chorale for the last movement, where the trombones finally make their regal entrance. True, it’s certainly not an easy entrance to make after sitting around through the previous movements, in nervous anticipation. But is it fair that they can relax and engage in card playing, checking their email and catching up on the latest baseball game scores? 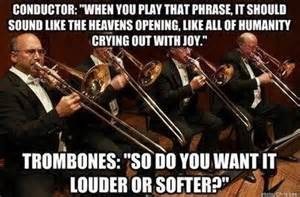 Meanwhile the trumpets considered what they could do to the trombone players in retaliation, while they tried to make a soundless entrance onto the stage before they were to play their chorale. A caveat here—Orchestra Hall stage is very reverberant and even the slightest shuffle of feet resonates.

The fourth movement starts ever so softly, slowly and with sparse plucking or pizzicato from the strings. Almost nebulous. This was their cue. There is a glorious horn melody followed by a scintillating flute solo. The trombones have almost three-and-a-half minutes to make their move from backstage to the stage. Meanwhile, the trumpet player in question stacked a pile of metal mutes, and with expert timing and precision knocked the tower over just as the low brass players stepped onto the stage. A cacophony of sound echoed everywhere. The other musicians kept playing, trying to keep a straight face, but the conductor was heard saying, “Everyone welcome our trombones. They are making quite a grand entrance on stage.” Stay tuned for what the trombones will do to repay this kindness.

Audience members are not privy to what is written in the sheet music— in the score i.e. all the instrumental parts written and lined up on the page for the conductor, and the individual parts for the musicians. Composers sometimes go overboard in their instructions beyond tempo markings, style markings, and dynamic markings. Some are quite odd. What, pray tell was Leonard Bernstein getting at by writing in the music score to his Divertimento—“dumbly”“cretinously” “imbecilically” “stupidly”? A prank? 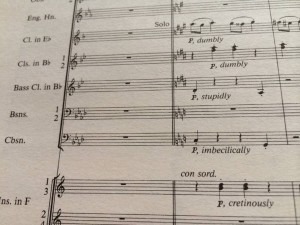 I’ve often seen other indecipherable instructions such as—boldly, ominously, heavily w/infinite power. I’m reminded of the joke— just tell me. Do you want it louder or softer? Faster or slower?

Many orchestras own their own sheet music parts and have music libraries so that our own markings from previous performances are preserved for future performances. This saves valuable rehearsal time. Music is occasionally loaned from one orchestra to another. It is not unusual to see hand-written warnings in the part—not just bowings, fingerings, pause marks, or dark circles around key changes or time signature changes.—helpful hints, jokes, comments floating from orchestra to orchestra.

Often when there are bars and bars of rests in the music you might see them marked in pencil so as not to lose your place. Other times there might be helpful comments such as—NAP TIME and little doddles. 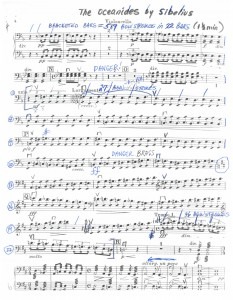 I’d number the bars and mark each pattern that repeated and repeated phrases or rhythms, so that our stand would not lose our place. Typical in music of John Adams, for example his Short Ride in A Fast Machine. When a huge number of notes are crowded into the bar we’d put dark vertical lines to mark the beats so that the rhythm could readily be discerned on sight when they whizzed by.

When for example, there is an unplayable time signature there may be exclamations such as AHHHGGGHHH!!! Or when a huge percussion blast is coming up in the music a warning might be written such as CRASH!!! Once in Carmina Burana, Carl Orff’s brilliant work which utilizes a huge chorus and solo singers, I saw a handy warning before a page turn—
EAR PLUGS: screaming soprano–>

And for self-preservation not only did I write in the parts —PLUGS IN….PLUGS OUT… but DANGER!!—endless repeated notes ahead that would tire any athlete, like in Oceanides by Jean Sibelius. The triplet figures Largamente begin in the YouTube seven minutes in!

There are many harmless practical jokes played—we’re only human! When cell phones were relatively new— so easy to forget to put them on vibrate— a member of our horn section called a colleague in the violin section during a slow movement of a piece. It rang loudly for all to hear.

Elaborating on the ever-popular idea of “Flash Mobs” some musicians like to take to the streets. Watch ‘Psycho Shower Scene’, ‘Mission Triangle’ and the hilarious ‘Follow the Leader.’ Musicians love pranks even outside of the confines of the symphony hall.