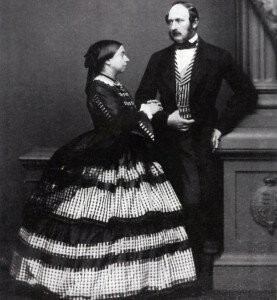 To coincide with the bicentenary of Queen Victoria’s birth, this year’s BBC Proms, the world’s largest classical music festival, will include a performance on a beautifully decorated gilded Erard piano. Many illustrious pianists played Erard instruments, including Chopin, Liszt, Mendelssohn and Wagner, and the Prom concert includes a performance by British pianist Stephen Hough of Mendelssohn’s Piano Concerto No. 1.

Mendelssohn: Piano Concerto No. 1 in G Minor, Op. 25 – II. Andante
Built by Parisian piano maker S & P Erard in 1856, the piano was supplied to Queen Victoria and Prince Albert on 30 April 1856. Music making was an important activity in the royal home, with the piano at its heart, and Victoria and Albert had pianos installed in the private apartments of all their residences, including Buckingham Palace, Balmoral and Osborne, and even on the royal yacht. Together they played duets, arrangements of overtures and symphonies, and Albert introduced his wife to music by Haydn and Mozart (though Victoria declared herself “too modern to appreciate Mozart much” (Journal, 18 April 1837). Albert also composed songs, some of which will be performed in Prom 40. 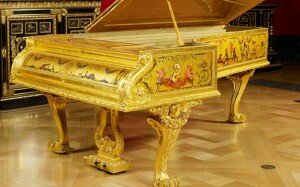 Victoria commissioned a piano from Erard as a showpiece for the State Rooms at Buckingham Palace. The elaborately carved and gilded mahogany case supported on cabriole legs includes floral decoration and scrolls, with oil painted panels by French miniaturist painter François Théodore Rochard (1798 – 1858) depicting comic pastoral scenes with cherubs and garlands, and monkeys playing musical instruments. Victoria had owned a similar painted piano in the 1830s, and noted in her diary: “Lord Melbourne admired the new painted piano I have in the drawing-room, and said, ‘I like those monkeys on it.’” The decoration on the 1856 Erard was based on this earlier instrument. The piano underwent a significant restoration in 2010 to remove surface dirt and revarnish the lids.

This is the first time the Erard piano has been allowed outside of Buckingham Palace. It stole the show when it was spotted behind the Queen during her 2018 Christmas broadcast, with some commentators suggesting that such gilded opulence undermined the Queen’s message about poverty. Of the piano itself, Stephen Hough has commented “There is an intimacy, and human quality…… which really does feel like something from another era.” As an antique instrument, it is understandably far less robust than a modern concert grand piano and its lighter, shallower action and smaller hammers require the pianist to play in a more delicate manner. Its voice and timbre will also be a surprise to concert-goers who are more used to the bright, projecting sound of a modern Steinway, for example. It will give listeners an intriguing insight into the musical world and tastes of Victoria and Albert.