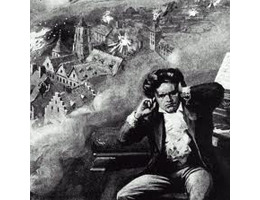 Beethoven and his deafness

What had begun as a slight ringing in Beethoven‘s ears around 1789 had progressively turned into partial deafness by 1801. In 1802, while spending the summer in the Viennese suburb of Heiligenstadt, Beethoven wrote his last will and testament, and addressed it to his two brothers. Intended to be read only after his death, Beethoven seriously entertained thoughts of suicide. “Thus it has been during the last six months which I have spent in the country… what a humiliation for me when someone standing next to me heard a flute in the distance and I heard nothing, or someone heard a shepherd singing and again I heard nothing. Such incidents drove me almost to despair, a little more of that and I would have ended my life — it was only my art that held me back.”

Promising a “completely new way of composing,” he radically departed from his previous two essays in the symphonic genre, and with the “Eroica” created a work of unprecedented length and complexity. The German author and music critic E.T.A. Hoffmann immediately recognized this newly conceived symphonic ideal, which also attempted to create the impression of a psychological journey and detail a teleological process of growth. “It is Beethoven’s instrumental music that moves the levers of fear, of shudder, of horror, of pain and infinite longing, that opens the realm of the gigantic and unfathomable.” 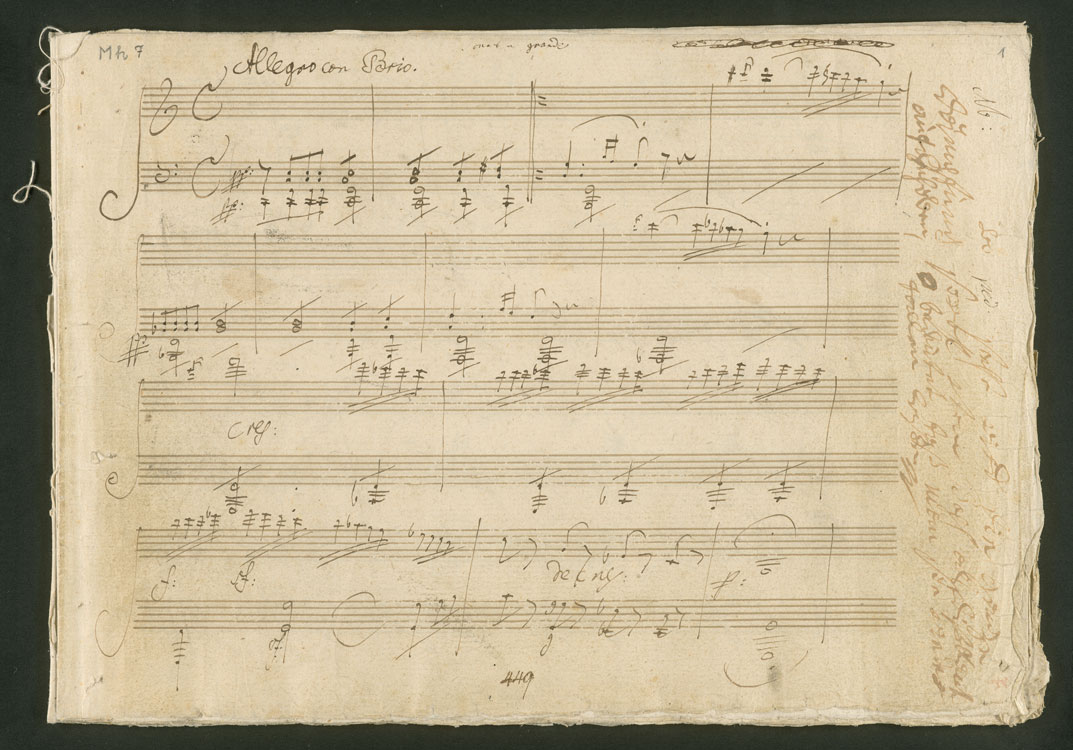 In short, Beethoven had left the naiveté of earlier composers behind and elevated the Symphony into a powerful vehicle of self-expression. This “entirely new way” of self-expression, however, is not confined to orchestral works. Rather, it also emerged in his chamber music and the expansive and monumental piano sonatas of his middle period. According to William Kindermann, Beethoven began to reshape his piano sonatas on a grand scale, introducing “innovations in texture, sonority, register, and color. In these middle period works, pianistic techniques and compositional devices merged to produce the distinctive and mature Beethovinian style.”

For one, Beethoven greatly expanded the formal design of sonata form — in particular the second-theme area and the coda — through wide-ranging tonal excursions. Particularly noteworthy is his replacement of the commonplace dominant key-area for the secondary contrast with non-dominant tonal goals. Embracing mediant and submediant keys, Beethoven creates, a structural dissonance against the tonic key. This provides the progressive tension that propels the movement towards a central climax, a process clearly demonstrated in the “Waldstein” Op. 53.


In essence, as Charles Rosen has suggested, Beethoven greatly expands the expressive range of Classical form. Concurrently, Beethoven also significantly expands the function and weight of the coda. No longer functioning as a mere appendage, it becomes a structural pillar for resolving the accumulated tension and instability. This characteristic redistributing of weight within the formal outline is frequently coordinated according to Alan Tyson “with the withholding of the harmonic resolution at the moment of recapitulation.” Beethoven’s transfer of the “symphonic ideal” into his piano sonatas is most acutely seen in the monumental “Waldstein” and “Appassionata” Sonatas, Op. 53 and 57, respectively. Here the composer adopts epic designs that become powerful musical declarations. In the “Waldstein”, according to Joseph Kerman “it is the “Adagio Introduzione”, which makes momentous preparations for the finale and give this sonata its characteristic symphonic sweep.” The “Appassionata”, in turn, is planned on even broader lines and greatest extremes. 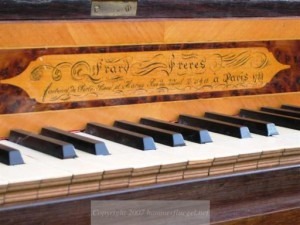 Form was no longer a fixed schemata, but in Beethoven’s hands becomes a process containing developmental elaboration and goal-directedness. At the fundamental level of this process stands the substitution of a distinct and bare thematic configuration for a lyrically inspired theme. Amongst this theoretical and philosophical discussion of the middle-period Sonatas, we should not forget to mention an entirely practical aspect as well. In 1803, Beethoven received a surprise gift, “un piano forme clavecin” from the celebrated Paris instrument maker Sebastien Érard. Although Beethoven was generally not entirely happy with the instrument, he clearly could appreciate some of the changes in construction. For one, the range of the keyboard had been expanded, which in turn produces much greater resonance. Heavier felt-covered hammers and the emergence of steel-reinforced frames on which to string heavier wires led to an increase in volume, and the invention of the double escapement mechanism allowed notes to be rapidly repeated. Although Beethoven complained that, “the English-type action was incurably heavy,” some of the highly explosive and violent effects that emerged in the “Waldstein” and “Appassionata” sonatas would have been unthinkable on his regular Walter piano!