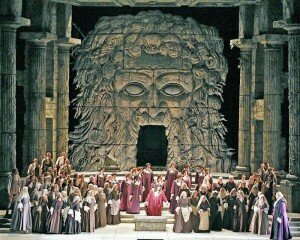 On 3 January 1781, Wolfgang Amadeus Mozart wrote his father from Munich, “My head and my hands are so fully occupied with my third act, that it would not be wonderful if I turned into a third act myself, for it alone has cost me more trouble than the entire opera; there is scarcely a scene in it which is not interesting to the greatest degree. The accompaniment of the underground music consists merely of five instruments, namely, three trombones and two French horns, which are placed on the spot whence the voice proceeds. The whole orchestra is silent at this part…” 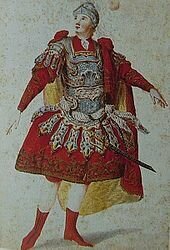 Mozart had received a commission to compose a serious opera for Munich in the summer of 1780. He engaged the Salzburg cleric Giovanni Battista Varesco to prepare a libretto based on a story involving King Idomeneus of Crete. The King promises Neptune that if spared from a shipwreck he will sacrifice the first person he sees, and is met on landing by his son Idamantes. Wolfie arrived in Munich on 6 November 1780 and set to work on pruning an exceedingly lengthy text, making the action more natural, and to accommodate the strengths and weaknesses of the singers. It certainly was not smooth sailing as Wolfie kept complaining, “recitative rehearsal had to be repeated six times, as Del Prato can “literally do nothing. His voice is not bad, if he did not sing from the back of the throat; besides, he has no intonation, no method, no feeling.”

The 3 January letter was penned merely three weeks before the scheduled performance, and Mozart continues, “The grand rehearsal positively takes place on the 20th, and the first performance on the 22nd. All you will both require is to bring one black dress, and another for every-day wear, when you are only visiting intimate friends where there is no ceremony, and thus save your black dress a little; and if my sister likes, one pretty dress also, that she may go to the ball and the Academie Masquee.” Luckily, the first performance of the complete work was delayed by one week, and the opera was given on 29 January 1781 with considerable success.