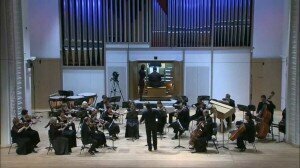 “In my eyes and ears,” wrote Wolfgang Amadeus Mozart, “the organ will forever be the King of Instruments.” And Ludwig van Beethoven apparently considered organists superior musicians “because of their improvisatory skills and multi-limbed virtuosity.” 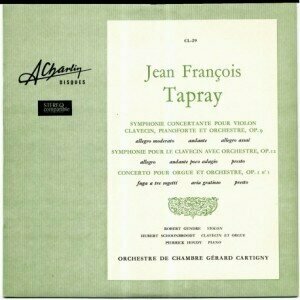 Although both Mozart and Beethoven made use of the organ in a variety of compositions, neither of them actually wrote a dedicated organ concerto. In fact, the honor of having invented the genre of the organ concerto in the true sense of the term, probably falls on George Frideric Handel. We know that he was an exceptional organ virtuoso, “His amazing mastery of the instrument, the magnificence and dignity of his style, the richness of his imagination and the prolificness of his ideas were qualities thoroughly eclipsed all lesser talents.“ But how did the organ concerto come about? In order to entertain his listeners during the intervals of his oratorio performances, Handel added the attraction of the organ concerto with himself as the soloist. This practice became so successful that Handel continued to perform organ concertos even after he had lost his eyesight. The first set of 6 organ concertos was published in 1738, and there is little guessing why the concerto HWV 295 is nicknamed “The Cuckoo and the Nightingale.”

George Frideric Handel: Organ Concerto No. 13 in F Major, HWV 295 “The Cuckoo and the Nightingale” 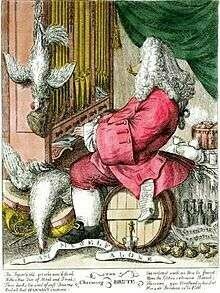 Painting of Handel playing a chamber organ,
by Joseph Goupy, 1754

Since the organ concerto proved highly popular with audiences, a number of English and international composers took up the challenge. Among them was Jean-François Tapray (1738-1798), hailed as “one of the most skillful organists in the realm.” Apparently, he studied with Monsieur Dancier, a student of Domenico Scarlatti, and we know that he composed an organ concerto at the age of 18 in 1757. In due time, he was the most published French member of the Paris school of keyboardist in the decades before the revolution. Improvisatory in nature, his musical style favored simply melodic ideas with minimal development and simple modulations, a musical discourse highly prized in France. As you might have guessed, however, his music was not really appreciated in Germany. Reviews lamented “the lack of tonal variety, formal coherence and correctness of modulatory passages,” particularly since Tapray’s music was compared to the late works of Mozart. 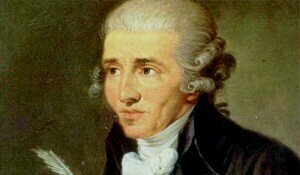 We essentially still don’t know exactly how many organ concertos Joseph Haydn wrote. It was long believed that 10 works in that genre could be attributed to him, but scholars have raised doubts about at least four of them. Things are even more complicated when we consider that in the second half of the 18th century, the word “Klavier” could mean at least 4 different instruments; the pianoforte, harpsichord, clavichord, or organ. We do know, however, that Haydn composed several dedicated organ concertos during his early years in Vienna. Working as a freelance musician, these works were presumably written to supplement his meager income. Clearly, they were not designed to highlight the virtuoso prowess of the soloist, but rather are an understated search for new colors and the creative alternation between solo and tutti passages. 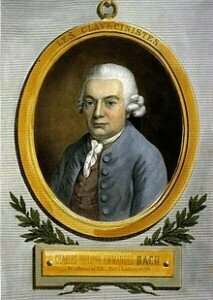 As the eldest and arguably the most musically talented son of Johann Sebastian Bach, it was almost inevitable that keyboard music would lie at the heart of Carl Philipp Emanuel’s (1714-1788) creative work. We find his first attempts entered in his own hand in the Clavierbüchlein for Anna Magdalena Bach around 1732. And when J.F. Reichardt reviewed a number of keyboard sonatas in 1796, he wrote, “No instrumental music had previously appeared in which as rich and yet well-ordered a harmony was united with such noble song, so much beauty and order with such originality.” His two organ concertos, dating from 1755 and 1759, respectively, have inconclusively been associated with Princess Anna Amalia of Prussia, sister of Frederick II. The Princess had a two-manual organ by Johann Peter Migend at her disposal, and C.P.E had previously provided her with a set of 6 Sonatas. We might never know with certainty, however, the two organ concertos are delightful yet technically challenging works.