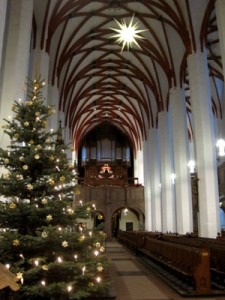 He wrote some of the most beautiful and inspiring Christmas music ever! Yet as a practicing church musician Johann Sebastian Bach had very little time to celebrate the Christmas season. When Bach signed the contract for the post at St. Thomas on 5 May 1723, it included various teaching assignments at the St. Thomas School. The school had a long choir tradition, and had to supply the four major churches in Leipzig—St. Thomas, St. Nicholas, St. Peter and the New Church—with choir music on Sundays and other Christian holidays. That meant that Bach had to form four choirs out of 55 students at the school. Each choir probably had eight singers, two sopranos, two altos, two tenors, and two basses alongside four soloists. The best singers were used for services at St. Thomas and St. Nicholas, while less talented boys had to sing less ambitious music in the St. Peter Church. Bach led choir rehearsals on Monday, Tuesday, Wednesday and Friday, and on Saturday the boys were joined by the instrumentalists for the rehearsal of the Sunday cantata. And that’s just for ordinary Sunday services; for the high holidays Christmas, Easter and Pentecost, his workload increased exponentially!

In between rehearsals and teaching, J. S. Bach also had to find time to compose the cantatas intended for the occasions of the liturgical year. As such, Bach composed a number of annual cycles that provided cantatas for every Sunday and all special occasions on the liturgical calendar. And that included cantatas for the inauguration of a new city council, consecration of church and organ, weddings, confession, funerals and functions of the University of Leipzig. Over a 5-year period, Bach is supposed to have written roughly 300 works, an effort that is still considered the “most astonishing creative explosion in the history of Western music.” Since only a single cantata was printed during Bach’s lifetime, two fifths of Bach’s cantata production has regrettably been lost forever! In Leipzig, the Christmas season was celebrated from Christmas Day through Epiphany. Three days were observed, with a Christmas cantata performed every day. For the Christmas season of 1734 Bach composed the Christmas Oratorio in six parts, to be performed as the cantata in the service on the six feast days, three days of Christmas, New Year, the Sunday after New Year and Epiphany. Over the years, Bach composed a seemingly endless number of Christmas specific cantatas that celebrate the overwhelming joy of the season.

Johann Sebastian Bach: Dazu ist erschienen der Sohn Gottes, BWV 40
Based on assumptions about the nature of modern bourgeois families, and on nineteenth-century idealization of the Bach family, we tend to image a happy Bach family gathering around Christmas time. Truth is, we have very little knowledge of daily life in the Bach household. The one thing to be sure, it would have been very different from one of today.

Between 1723 and 1737 Anna Magdalena went through no less than twelve nine-month pregnancies (with the exception of the years 1729, 1734, and 1736). Eight of the twelve children died at ages varying from an hour to five years. We don’t know how family member interacted with one another, but life must have been highly organized and focused on productive work. On the occasion of Christmas, every capable member of the family, as well as some of the more advanced and trusted students in the St. Thomas School, was put to work to ensure the orderly presentation of Bach’s highly elaborate and difficult compositions. Bach’s Christmas music—large-scale ebullient works which never fail to invigorate and delight—leave the bitter experiences of everyday life far behind. Every bar of his music rings with a truth that is musical, spiritual and profoundly expressive. Merry X-mas with Johann Sebastian Bach.