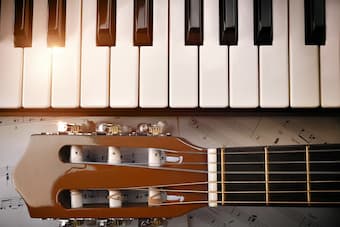 The guitar and the piano. From a composer’s point of view they are both small-sized orchestras; although one slightly more portable than the other. They have been used by musicians, and particularly composers — unstoppably since their invention, and for many reasons. Aside from the similarities in their construction and the way they operate, both instruments represent very similar tools in the hands of the composer. The guitar catalog is quite large, and the piano one, endless! This has resulted in many works for piano being rearranged for guitar, and at times vice versa too. There have even been instances where the arrangements overtook the success of their originals. The piano and the guitar are two hugely popular instruments in the world — respectively ranking at number one and two —, while the former has often been called the mother of instruments, might the other constitute the father and together, might they form the musical parents of all instruments? Here are some of the reasons for all this. 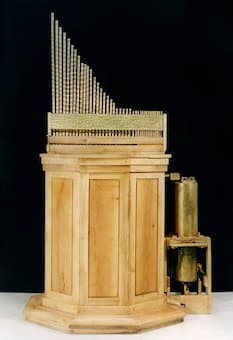 The piano as we know it is over two-hundred years old, its ancestors though — organs, clavichords and harpsichords — are more than seven-hundred years old. Actually, the earliest known keyboard instrument was the Ancient Greek hydraulis; a type of pipe organ, invented in the third century BC. When it comes to the guitar, it is around the thirteenth century that the instrument as we know it began its evolution in Spain. But it’s oldest ancestor — a chordophone — has been found in Babylonian carvings. The Bible even mentions a “kithara”, often translated as a harp, and which has given the modern Italian for guitar, chitarra.

Both instruments function in a very similar way; they use resonating strings, and while the guitar has them plucked, the piano has them hit by a hammer — however, some of its ancestors such as the clavichord used to function very similarly to the guitar. At its maximum, the piano has a total of eighty-eight strings; they all vary in length, allowing different pitches to be produced. The guitar has only six strings, but acts similarly, as it is by fretting the strings that the player reduces the length of the string, creating a different pitch for each fixed length. Luckily for the guitar, it is a lot easier to tune than the piano, which requires the help of a professional. 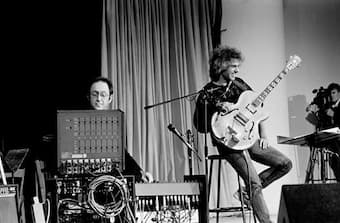 As opposed to wind instruments, both the piano and the guitar can play in all twelve keys, although some keys are favoured by pianists and guitarists. Additionally, both instruments have a wide range of tonal capabilities, dynamics, timbres and techniques, as well as more recent extended ones — to this day though, most instruments benefit from extended techniques, as demonstrated in Bartók’s strings or Cage’s prepared pianos.

The arrival of electronics has only expanded these possibilities and in the case of the electric guitar, it has almost overcome the original nature of the instrument. The creation of the electric guitar has allowed the development of popular music as a rich form of art, and more than a simple form of entertainment. Ultimately, this has also led to the development of the synth, and no further words are needed when it comes to its success!

Both the piano and the guitar are capable of producing multiple melodic lines, independently supporting the harmony, allowing for polyphony and polyrhythm, as both have a wide pitch-range. They are convenient — while one is small enough to be carried easily, the other one is found all over the world, enough to become the furniture of many airports and train stations. While other instruments have similar profiles — for instance the harp, the xylophone or the marimba — they are often left out for practical reasons, as well as tonal reasons; indeed both the guitar and the piano’s tonal personalities could be described as neutral and easily shapeable, which is not the case of the marimba for instance. It is to be noted that the harp can be somehow used as a “louder guitar” in orchestral settings.

The two instruments have often had their music rearranged to fit each other, and in some cases, like Albéniz’s Suite Española, the guitar arrangement has surpassed the original piano composition. These two instruments are in the end so similar, that it is rarer to see them together than on their own; they are so popular that this would lead to a battle of egos.

Additionally, the guitar, thanks to its ancestors, has seen much of baroque music adapted to it — including much of Vivaldi, Bach and Scarlatti — and has participated in carrying the music of this period throughout the centuries. Without its help, who knows if these works would have survived so well…

Of course, most composers’ primary instrument is the piano, although some exceptions include Berlioz — who had only studied the guitar. Paganini, originally a violinist, also played the guitar and it is known that Schubert owned many guitars. In recent times, the minimalists have arranged a lot of their music for guitar, an instrument that fits the genre quite well. Of course, Reich’s music comes to mind, particularly his Electric Counterpoint or Nagoya Guitars.