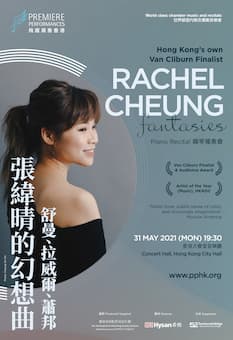 One of the most sought-after musicians in Hong Kong, pianist Rachel Cheung achieved worldwide acclaim after reaching the finals and winning the Audience Award in Van Cliburn Piano Competition in 2017. She gave a compelling recital entitled “Fantasies” on 31 May 2021 in Hong Kong City Hall, with a programme consisting of Schumann Fantasiestücke, selections from Ravel Miroirs and Chopin Andante Spianato et Grande Polonaise Brillante.

Dedicated to Anna Robena Laidlaw (an accomplished pianist), Schumann’s Fantasiestücke was inspired by E.T.A. Hoffmann’s Fantasiestücke in Callots Manier and contained eight pieces with varying character. Poetic and expressive, Rachel Cheung’s playing demonstrated a thorough understanding of the neurotic nature and duality of Schumann’s music. Her artistry shone through in how she amalgamated the conflicting personalities of Florestan and Eusebius in an organic manner, which intertwined throughout the opus. For instance, “Aufschwung” was performed with incandescent, almost uncontainable passion, while “Des Abends” was given a calm, serene and beautifully sung account.

Needless to say, the pianist displayed an exceptional technical command, which manifested as a sense of ease in virtuosic pieces such as “Traumes Wirren”, together with some refined dynamic shading. The most outstanding piece would be “In der Nacht”, in which she delivered a delicate sense of drama and tension through her imaginative playing.

“Une barque sur l’océan” from Ravel’s Miroirs became a colouristic, highly nuanced aquarelle under her hands – the undulating motion of waves was effectively portrayed by the flowing left hand while achieving transparency in sound and subtlety in tonal changes. Her performance of “La vallée des cloches” evoked the imagery of the title, i.e. “The Valley of Bells”, with her careful voicing and dynamic gradations. 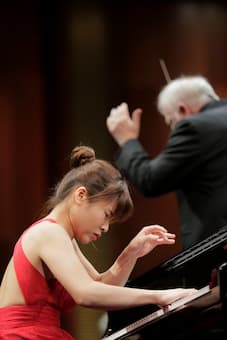 The only weakness in the entire recital for me was her “Alborada del gracioso”. The immensely challenging acrobatics, including double glissandi and repeated notes, were effortlessly tackled and her reading was certainly electrifying and virtuosic. However, it slightly lacked the exotic side and Spanish inflections of the music, and the sound was sometimes harsh as the music reached fortissimo.

The programme was concluded with an again scintillating rendition of Chopin’s Andante Spianato et Grande Polonaise Brillante, Op.22. The opening Andante Spianato had an ethereal, bel canto singing style with a polished touch throughout, providing a refreshing preparation for the forthcoming Polonaise. The Polonaise here was more convincing than her performance at Chopin competition more than a decade ago – here the ideas were tightly connected, and the Polonaise pulse was evident even with the elaborate decorations. Her rubato was tasteful and always natural without distorting the intrinsic rhythm. Rachel Cheung’s playing had much to commend – it was poised, resplendent and aristocratic. She avoided excessive sentiment in the more lyrical section in C minor, while giving sheer brilliance to the passagework, in which she transcended the technical difficulties and fully conveyed the Polish pride in the music with aplomb. 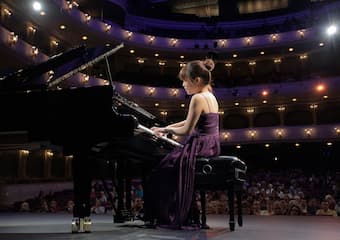 With rapturous applause from the audience, the pianist offered two encores, Rameau’s La Poule and Schumann’s Träumerei from Kinderszenen. The Rameau piece had ornaments executed with clarity and buon gusto, while the Schumann miniature brought the concert to a satisfying end.

Rachel Cheung’s immaculately layered playing achieved an exquisite balance between impulse and rationality, from the mercurial Schumann to the intricate Ravel to the noble Chopin. Who’s in front of us is not a pianist in the making but instead a complete musician with interpretive maturity, technical facility, and genuine love for music.