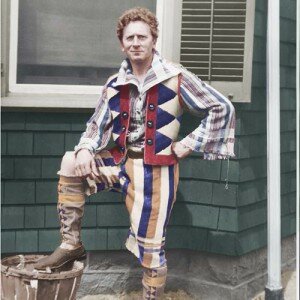 Grainger in one of his toweling outfits
© Percy Grainger Museum, Melbourne

Percy Grainger (1882-1961), Australian pianist, composer and noted eccentric, is most famous for ‘Country Gardens’, his transcription of an English folksong, with its frolicking rustic lilt. But Grainger was much more than a collector of folksongs. A friend to Grieg (who praised Grainger’s interpretation of his Piano Concerto), Delius, Gershwin and Duke Ellington, Grainger was celebrated in his lifetime as a composer and one of the most gifted pianists of his generation (he was taught by Ferruccio Busoni), whose transcriptions of Dowland, Gershwin songs, Bach chorales, Strauss and Rachmaninoff are beautiful virtuosic contributions to the piano repertoire, and a testament to his own pianistic wizardry. Yet he despised the instrument, calling it a “box of hammers”, and neglected his hands so badly that they were often calloused. 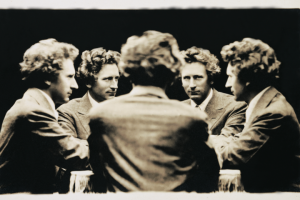 Born in Australia in 1882, Grainger left his home country at the age of 13 to attend the Hoch Conservatory in Frankfurt where he was soon lauded as a musical prodigy. There he met English composers Roger Quilter, Balfour Gardiner, and Cyril Scott, whose influence shaped much of Grainger’s career and who remained lifelong friends. Together they formed the ‘Frankfurt Group’, which aimed to liberate British and Scandinavian music from what they perceived as an oppressive German and Austrian influence. He was based in London from 1901 to 1914, where he became established as a society pianist, concert performer, composer, arranger and collector of English folksongs, and met many of the leading figures in European music at that time. He emigrated to America in 1914, alienating many of his British champions, but soon re-established his performing career, playing at significant venues like Carnegie and Aeolian Hall, and became an admired teacher.

Grainger: Molly on the Shore
He was a noted eccentric, with a penchant for colourful outfits which he made himself out of towels. He was also known to dash across the stage, wearing only gym kit, and leap on to the piano stool, or, at the end of the Grieg Piano Concerto after finishing the final cadenza, he would run through the audience, touch the back wall of the auditorium and rush back onstage in time for the final chords of the concerto. His predilection for unusual sexual practices is also well-documented and the Percy Grainger Museum in Melbourne contains a collection of his whips, including some made from old conductors’ batons.

Grainger: Blithe Bells (arr. of J.S. Bach’s Sheep may safely graze for piano)
Most of his works are miniatures, and often feature unusual instruments such as the theremin or banjo. He was ahead of his time, musically, and experimented with flexible rhythms, improvisations, tuned percussion, influences from jazz and world music, microtones and chance processes and even electronics before John Cage was even born. He invented instruments of his own, including the Kangaroo Pouch, an oscillator which sounded like a malfunctioning air-raid siren, and the Butterfly piano, tuned in 1/6 tones.

Grainger: Country Gardens
He eschewed traditional Italian musical terms, preferring his own such as “louden lots” for crescendo, and coined new tempo markings like “clingingly” or “hammeringly”. He rejected his German conservatoire training and disdained classical form, so you won’t find any symphonies or sonatas amongst his oeuvre. But what you will find are free-form instrumental fantasies, deeply evocative choral settings, and improvisatory “rambles”. His music is overflowingly romantic, rich in ingenious, idiosyncratically lush harmonies, pungent dissonances and perfumed resolutions, ardent long-spun melodies and impractical yet elegant rhythms. Too often regarded as a composer of “light music”, perhaps because of his fondness for folksongs, his music is in fact sophisticated, always engaging and accessible, and with a delightful dash of wit.