Composers Anecdotes
From Stage to Film: The Many Lives of George Gershwin’s Work
by Maureen Buja September 15th, 2017
Tags: Gershwin 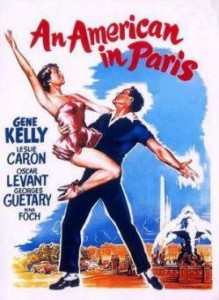 An American in Paris poster

For many people, Vincent Minnelli’s film An American in Paris, presents a number of perfections: the perfect Paris, the perfect music, and the perfect lyrics. Starting with the program music of An American in Paris, the orchestra work, Alan Jay Lerner created a perfect post-war Paris that had more to do with dreams than reality. Our hero, painter Jerry Mulligan, lives in the requisite garret with the requisite artist neighbor, pianist Adam Cook. It’s shades of La bohème. However, these aren’t exactly starving artists, their big break is right around the corner, and, of course, since it’s Paris, love is there as well.

The story line is like a romance novel turned inside out: should our artist-hero go with the wealthy dilettante or fall for the poor but talented perfume salesgirl, and, in the process, steal his best friend’s fiancée? We know the answer to that one!

In putting the story together, Lerner had the entire catalogue of Gershwin’s music at his fingertips. One song, ‘Tra-la-la (This Time It’s Really Love)’ although written in 1922 for the musical For Goodness’ Sake, had been dropped from the show before it hit the stage. Thus audiences, although viewing a Gershwin musical some 35 years after his death, were still in a position to be hearing new music.

Another song, ‘By Strauss,’ from 1936, didn’t come from a Gershwin show, but had been part of a revue, The Show is On, put together by Vincent Minnelli in 1936. The Gershwins had been performing the work at private parties as a music joke – what could the desperate audience member want if he hated jazz, Broadway, Irving Berlin, Jerome Kern, Cole Porter, and Georg Gershwin? It could only be the old Viennese melodies by the Johann Strausses. We get glimpses of some of the Strausses best known melodies: An der schönen blauen Donau; Wein, Weib und Gesang; and selections from Die Fledermaus, intersperced, of course, with suitable sarcastic commentary (Broadway songs are described as ‘emptiness pounding on tin’ – a nice reference to Tin Pan Alley). In the performance in the movie, every trope of German music and culture is called forth: um-pah-pah bands, the duel to the death, the long pauses in the waltz for a pose or two. The end result is a wonderful amalgam of music (watch Gene Kelly tap dance and waltz here).

Listen to 1956 recording of Merman belting the song and you’ll hear the brashness of tone that made her vocal sound unique.

In Gene Kelly’s performance, the song is changed to something much more subtle.

The other songs in the movie came from a variety of sources:

The two consummate set pieces in the film are both dream sequences. The pianist Adam Cook (played by pianist Oscar Levant) dreams of the ultimate performance of the concerto he’s been working on (Gershwin’s Concerto in F). In the performance of the third movement in his dream, it’s gradually revealed that he’s not only the soloist but also the conductor, the violin section, the percussionists, and the enthusiastic audience member who yells ‘Bravo’!

In Jerry’s dream sequence, the work An American in Paris becomes a grand review of the city. Gershwin said: “My purpose here is to portray the impressions of an American visitor in Paris as he strolls about the city, listens to the various street noises, and absorbs the French atmosphere.” In Gene Kelly’s choreography, it become an artistic tour of Paris with artwork by Raoul Dufy, Pierre-Auguste Renoir, Maurice Utrillo, Henri Rousseau, and Toulouse-Lautrec coming to life. The city streets and the art are the background for the dance and every passerby gets drawn in.

The film won six Academy Awards, and over time, has been recognized by the American Film Institute as one of the top 100 movies. The musical Oklahoma! only 4 years later changed the construction of the musical entirely and modern critics look at An American in Paris as being a bit stilted, with a limping story line. When you look at modern film-musicals such as La-La Land, however, the influence of this movie cannot be denied.