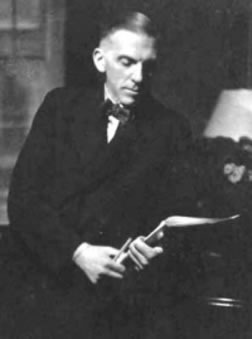 Roger Quilter (1877-1953) was an English composer known primarily for his elegant and distinguished art songs. He has composed more than 100 of them throughout his career, in addition to his choral, instrumental, and stage works.

Born in Sussex, the United Kingdom on November 1st 1877, Quilter was the third of five sons in a large family. He began his musical study at Eton College in 1892. With his mother’s encouragement on his artistic inclinations and a favourable family background (his father being a wealthy stockbroker and well-known art collector), he later enrolled at the Hoch Conservatory at Frankfurt-am-Main and took composition lessons under the tutelage of Ivan Knorr. He and other students of the conservatory in the late 1890s, including Percy Grainger, Cyril Scott, Norman O’Neill, and Balfour Gardiner became known as the “Frankfurt Group”.
Roger Quilter: The Arnold Book of Old Songs: Drink to me only with thine eyes
Quilter’s career as a song composer was well established in the 1900s. In March 1901, his Songs of the Sea were performed by Denham Price at the Crystal Palace. He immediately won public attention to his talent. In 1905, Gervase Elwes, one of the leading tenors of that time, premièred Quilter’s song-cycle To Julia, which further marked his success as a song composer. For many years, his songs were frequently broadcasted on radio.
Over the succeeding years, Quilter continued to write songs for an appreciative audience. Although suffered from a continuous poor health, he was a philanthropic artist. He founded and administered the Musicians’ Benevolent Fund in memory of his great companion Gervase Elwes (who was killed in an accident at Boston railway station), organizing concerts in various hospitals and involving in a series of chamber concerts after the First World War.
Quilter has developed loyal friendships with several musicians during his lifetime. In 1911, he wrote the incidental music for a children’s play Where the Rainbow Ends, produced by Italia Conti, who subsequently founded the Italia Conti School (now the Italia Conti Academy of Theatre Arts). For many years, Quilter was invited to conduct the opening matinée of the season at the school. In 1923, Quilter met a young baritone, Mark Raphael, whom he worked with closely throughout the years. He also collaborated with Rodney Bennet on a number of projects, including the light opera, Julia, which was premièred at the Royal Opera House, Covent Garden, in December 1936.
After a productive and benevolent artistic life, Quilter experienced a period of mental decline and eventually died at the age of 75 at his home in St. John’s Wood, London on the 21st September 1953. A memorial concert was held in his honour, which was very well attended by family, fellow musicians and ordinary audience who loved his music.