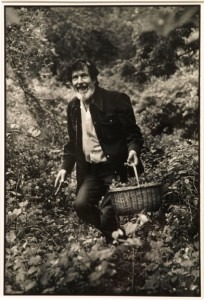 John Cage, the legendary composer of experimental sounds and silences was utterly fascinated by mushrooms. Apparently, Cage’s fungi obsession originated during the Depression. “In California, I had no money. I was living in Carmel and around my shack grew mushrooms, I decided they were edible and lived on them.” But things got really started when Cage moved to Stony Point, in the State of New York. His friend, the architect Paul Williams had bought a large farmhouse with the intention of converting it into an artist’s colony. Located in a densely wooded area, large swaths of wild mushrooms surrounded the farm and Cage quickly became somewhat of an expert. Cage suggested, however, “it’s useless to pretend to know mushrooms. The more you know them—about telling, for example a Spathyema Foetide from a Collybia Platyphlla—the less sure you feel about identifying them.” Truer words were never spoken as Cage served a mushroom and vegetable dish to his friends with the result that everybody had to go to hospital to have their stomach pumped.

On the artistic side, Cage came to the conclusion “that much can be learned about music by devoting oneself to mushrooms.” Although he suggested that he was not interested in the relationship between sounds and mushrooms, he nevertheless managed to successfully combine his two areas of expertise. In 1958/59, John Cage visited the composer Luciano Berio in Milan, who was doing audio research with the likes of Umberto Eco and Bruno Maderna. Berio had close connections with the state television network RAI, and somehow Cage found himself being a contestant on the quiz show Lascia o raddoppia. Answering expert questions on mushrooms, Cage ended up winning the 5 million Lira jackpot. Over his five appearances on the show, Cage entertained the audience not only with his mushroom expertise, but also staged a number of his compositions. The local newspaper reported, “Mr. John Cage, strange and futuristic music composer and performer sat by a special piano tweaked with nails, screws and elastic bands. The piece was entitled Amores and it sounded like a funeral march.” In the end, the host of the show Mike Bongiorno jokingly suggested that Cage should spend more time in Italy, but hoped that his music would disappear forever.

John Cage: Amores
Building on his overseas mushroom notoriety, Cage supplied exclusive New York restaurants with a variety of exotic fungi. He was instrumental in the revival of the New York Mycological Society, and he always had an extensive collection of fungi in his basement. He even accepted an appointment at the New School—a famed experimental University in New York—under the condition that alongside teaching music he could also teach a mushroom identification class. This dual academic offering ran for three years and was extremely popular with students and faculty alike. He even wrote a Mushroom Book—illustrations and all that was probably intended for consumption! Mushrooms, it seems, were central to his philosophy as an experimental artist.

But John Cage really shines in his mushroom recipes. His “Morels à la John Cage,” which can be served as an entrée with croutons, or with veau en cocotte with dill and fresh noodles, starts with a bottle of flat champagne. Place 1 pound of mushrooms with 1/3 cup of sweet butter in a baking dish and cook over moderate heat (350°–375° F) for 20 minutes. Add ½ cup of champagne and continue cooking for a quarter of an hour. Season with salt and pepper, cover with cream, and put back in the oven until the cream is bubbling. Bon appetite, just make sure you select the correct mushrooms!