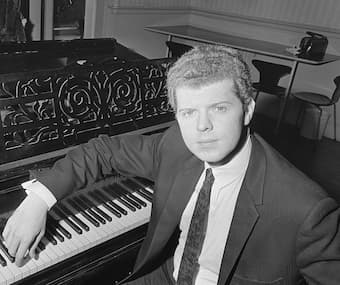 It still ranks as one of the biggest sensations in classical music when Harvey Lavan “Van” Cliburn Jr. won the inaugural International Tchaikovsky Competition in Moscow in 1958. With the Cold War raging, the Soviet Union scored a huge technological victory with the launch of Sputnik in October 1957. Eager to follow up and demonstrate Soviet cultural superiority, the idea of an international competition was born in 1956 at the USSR Ministry of Culture under the command of Minister N. Mikhaylov. Believing that “the Competition would be of great political importance, the then country leader Leonid Brezhnev quickly approved a large budget that included generous awards and a hospitality program that bore the costs of the foreign competitors from 22 countries.” Dmitry Shostakovich headed the Competition Organizing Committee, and the jury of the 1st Competition included Emil Gilels, who acted as the chairman, Heinrich Neuhaus, Lev Oborin and Sviatoslav Richter. A group of 50 pianists went to Moscow, including a tall, curly-haired Texan pianist named Van Cliburn. 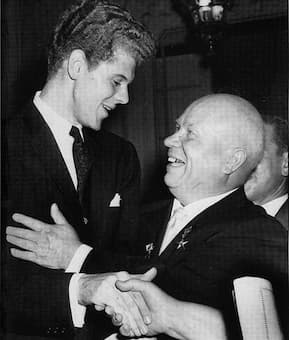 Cliburn’s performances created an immediate sensation. On 13 April he performed Tchaikovsky’s Piano Concerto No. 1 and Rachmaninoff’s Piano Concerto No. 3, and he received a standing ovation lasting eight minutes. “After the ovation, Van Cliburn made a brief speech in Russian and then resumed his seat at the piano and began to play, to the surprise and delight of the Russian musicians visible behind him in the film made of his part in the competition, his own piano arrangement of the much-beloved song “Moscow Nights,” which further endeared him to the Russian audience.” When it came time to announce the winner on 14 April, the judges felt obliged to ask permission from the Soviet Premier Nikita Khrushchev if they could really give first place to an American. Apparently, Khrushchev asked the jurors if Cliburn was indeed the best pianist? When they answered, “Yes,” Khrushchev replied, “Then give it to him.” Cliburn returned home to a hero’s welcome and a ticker-tape parade in New York, the only time that honor has been accorded to a classical musician. 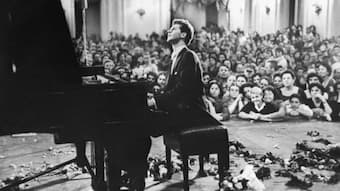 Cliburn told the audience, “I appreciate more than you will ever know that you are honoring me, but the thing that thrills me the most is that you are honoring classical music. Because I’m only one of many. I’m only a witness and a messenger. Because I believe so much in the beauty, the construction, the architecture invisible, the importance for all generations, for young people to come that it will help their minds, develop their attitudes, and give them values. That is why I’m so grateful that you have honored me in that spirit.” Van Cliburn was born in Shreveport, Louisiana, on 12 July 1934. At the age of 3, he began to mimic melodies at the keyboard. His mother, Rildia Bee O’Bryan Cliburn immediately recognized his talents, as she had studied piano with Arthur Friedheim, one of Franz Liszt’s foremost students. She became his first teacher, and at the age of 4, Cliburn gave his first public performance playing a Bach Prelude and Fugue. Under his mother’s tutelage he “developed a rich, round tone and a singing-voice-like phrasing, having been taught from the start to sing each piece.” At 13 he won a competition in Texas, which secured him an engagement with the Houston Symphony Orchestra. 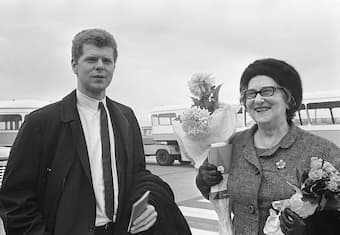 One year later, he played in Carnegie Hall as the winner of the National Music Festival Award. Cliburn fondly remembers “because of his height and large hands, his high school tried to recruit him for the basketball team.” Cliburn entered Juilliard at age 17 and studied with Rosina Lhévinne. In quick succession, Cliburn won the Dealey Award, the Kosciuszko Foundation’s Chopin prize in 1952, the Juilliard concerto competition in 1953, and the Roeder Award in 1954. Later that year, Cliburn won the highly prestigious Leventritt Award. During the early stages of his career, Cliburn “was admired for the completeness of his technical command and for his massive, unpercussive tone. Even more remarkable was his musical taste, which, although it could produce rather distant performances of Mozart and Beethoven, gave his playing of the Romantic repertory an extraordinary character of grandeur combined with both chastity and warmth.” His victory at the International Tchaikovsky Competition propelled him to international stardom, and he “performed for royalty, heads of state, and every US president from Harry S. Truman to Barack Obama.” However, Cliburn was never entirely comfortable in the limelight. As he once explained, “I was never really the type that needed the stage. I love music. I love listening to it. When you have to serve music, you must be thinking of others, not yourself.”