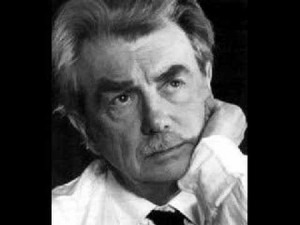 The noise of the new so often pushes the old out of our sight that often it’s a good idea to go back and see what we might have missed or forgotten. Today, we’re looking at the influential Heinrich Neuhaus.

Neuhaus (1888-1964) came from the Ukraine and was a largely self-taught pianist. He did have some early influences, such as the fact that both his parents were pianists, as were his cousin, composer Karol Szymanowski and his uncle, composer Felix Bluemfeld. At age 14, he was giving recitals with the 11-year-old violinist Mischa Elman, and was touring Germany at age 16.

By his mid-thirties, he was teaching at the Moscow Conservatory and from that position, taught the greatest of the 20th-century Russian pianists, including Sviatoslav Richter, Emil Gilels, Tikhon Khrennikov, Radu Lupu, and Nina Svetlanova, among many others. The result of his work was the 1958 book The Art of Piano Playing, which has become the standard work in the field.

His playing is recognized for its high level of artistic refinement and clarity of playing that made him stand out from his more bombastic contemporaries.

In this Brahms performance, each voice line sings and holds its own. This is in keeping with the core of his teaching beliefs: he wanted students to understand the language of a work. They shouldn’t merely play the notes, but understand a work’s logic and structure as well as its underlying harmony. Writers about his performances constantly reference the poetic qualities of his playing.

The composer he’s most identified with is the Russian composer Scriabin. His student Nina Sbetlanova wrote that when Neuhaus played Scriabin, “he was creating an illusion that the sound was coming not from the striking of the hammer on the strings, but just appeared by themselves from the air.”

Go back to the subtleties of the pianism with Heinrich Neuhaus.