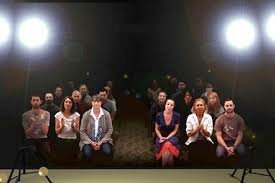 Audience in the ‘performance simulator’

As every performing musician will tell you, there’s a world of difference between playing in the privacy of one’s home or rehearsal room and performing in public.

Like the music itself, performing needs to be practised, but for most musicians opportunities to practise performance are limited. Hiring venues is expensive, and while most colleges and conservatories have decent performance spaces, access to them is often over-subscribed, giving students little chance to perform for others – a curious paradox given that they are being trained to be performers!

The bulk of the musician’s life is occupied with rehearsing, which takes place in spaces and conditions very far removed from the excitement, tension and acoustic of a live performance, and most aspiring professional musicians undergoing training in music colleges and conservatories lack repeated exposure to realistic performance scenarios. Without this crucial experience, students have few opportunities to learn how to manage the stress of live performance and the demands of audiences, audition panels and competition juries, and to hone their stagecraft.

The anxiety of performance is common to all musicians, to a greater or lesser extent, and for some it can be extremely debilitating. The Royal College of Music in London has sought to redress this by developing a ‘performance simulator’ which creates, as far as possible, realistic back-stage and on-stage areas for performers, including spotlights, signage, a stage door, and backstage monitor showing the concert “stage”. Pilots and surgeons have long used simulators in their training, and the RCM’s performance simulator is inspired by a virtual operating theatre. Situated in a small room right at the top of one of the towers of the college, the performance simulator creates the atmosphere and sounds of a live concert via a large screen in the middle which displays a virtual interactive audience who applaud, cough, fidget, talk and even boo. The simulator also offers students the chance to perform before an interactive audition panel of three stern-looking judges, who may smile, fold their arms or talk to one another, and the “personality” of both audience and judging panel can be pre-set to friendly, indifferent or hostile – again contributing to the realistic setting. Performances are filmed and physiological and psychological information about heart rate, breathing etc. can be recorded and scrutinised after the performance. This kind of data can be extremely useful in post-performance analysis, highlighting omissions in stage craft, for example, (forgetting to greet or bow to the audience/judging panel), or revealing too much or too little gestural movement in a performance – all aspects which can enhance or detract from a good performance. 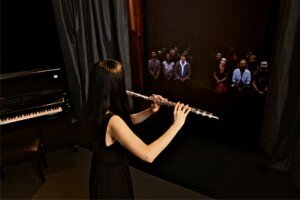 Performing in the ‘performance simulator’

I had the opportunity to use the performance simulator as part of a post-graduate student’s research project, and I found the experience very interesting. I had already seen a version of the simulator in action at a musician’s health and well-being conference, and I thought I knew what I was in for. However, the actual experience of waiting to go “on stage“ and performing to the judging panel was surprisingly stressful, even though I knew it was a simulation on a screen. The realistic human noises coming from the panel can be distracting, especially when one is in that heightened sense of awareness which comes from the body’s natural response to an anxious situation and the very normal symptoms of anxiety were all there – increased heart rate, shallow breathing, nausea, perspiration etc. The playing experience is different too: one knows one must project more, share and give one’s music to the audience – aspects which are hard to recreate in the privacy of the practise room.

Understanding the physical and psychological symptoms of performance anxiety and learning how to manage them enables musicians to perform better and smarter, and to prepare properly for auditions and competitions. The performance simulator is an important new resource and support for music students as they embark on their professional career.