Described as one of the natural wonders of Scotland, Fingal’s Cave is located on the uninhabited island of Staffa, in the Inner Hebrides. Formed from hexagonally jointed basalt columns it became known as “Fingal’s Cave” after the hero of an epic poem by the Scottish historian James Macpherson. It was part of his highly influential Ossian cycle of poems supposedly based on old Scottish Gaelic verse. 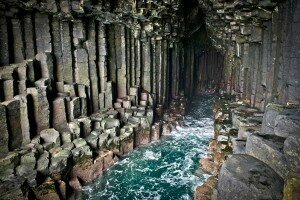 And when the novelist Sir Walter Scott visited the cave, he wrote, “it is one of the most extraordinary places I ever held. It exceeded in my mind, every description I had heard of it…. as high as the roof of a cathedral, and running deep into the rock, eternally swept by a deep and swelling sea”. Other famous visitors to the cave included the author Jules Verne, poets Wordsworth, Keats and Tennyson, the painter J.M.W. Turner and Queen Victoria. And then there was Felix Mendelssohn, who visited the cave in 1829 during his tour of Scotland.

In July and August 1829, Mendelssohn and his poet friend Karl Klingemann visited Edinburgh and Abbotsford. He began to draft the opening of his Symphony No. 3—eventually to be subtitled “Scottish”—and he wrote to his sister Fanny. “In order to have you understand how extraordinarily the Hebrides affect me, the following came to my mind.” And that postcard contained the opening phrase of what would eventually become his Hebrides Overture. It is been suggested that the echoes Mendelssohn experienced in the cave inspired this particular theme, although there is no definitive proof that Mendelssohn ever got close enough. The first complete draft of the work was completed on 16 December 1830 and entitled “The Lonely Island.” Not entirely satisfied with the work, Mendelssohn embarked on a series of revisions. The final version, now titled “Hebrides Overture,” was completed on 20 June 1832, and it premiered on 10 January 1833 in Berlin with the composer conducting. Richard Wagner subsequently called the work “one of the most beautiful pieces we possess.”