Venus, in the middle, presides over her realm, but as it’s Spring, as we know from the painting’s title, Primavera, the world is a buzz of activity. 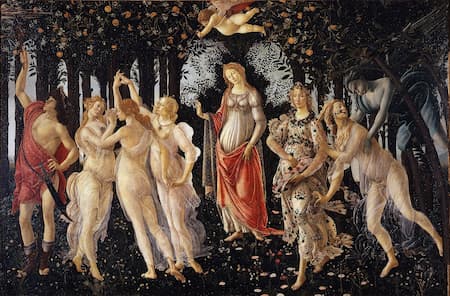 As we read the painting from right to left, we start with barren boughs, and through the trees comes Zephyr, the west wind, the wind that brings the warmth of spring. He’s intent on capturing the nymph Chloris, who, as Ovid describes, ‘breathes spring roses’ as she talks. Her capture by Zephyr turns her into the goddess Flora, now clothed and crowned in flowers. Above Flora, the flowers and fruit have appeared. Above Venus in the center is Cupid, blindfolded and armed with his dangerous arrows. He’s the son of Venus and Mars, the god of war. He’s taking aim at the three Graces, and at the right, picking the now ripe fruit, is Mercury, shown with his winged sandals, raising his caduceus.

The painting was commissioned by Lorenzo and Giovanni di Pierfrancesco de’ Medici, cousins of Lorenzo il Magnifico. They kept the painting in the house in Florence.

Ottorino Respighi chose three paintings by Botticelli, all in the Uffizi Gallery, as the subject of his Botticelli Trilogy (Trittico botticelliano). The work is dedicated to Elizabeth Sprague Coolidge, a patron of many composers, including Ravel and Bartók. Respighi’s Spring is full of motion – birds song and happiness seem to be its chief ingredients. Picking up on the actions of the three Graces, the music is full of dance rhythms.


The Adoration of the Magi tells of the arrival of the Three Kings from distant lands who have followed the star to give their gifts to the new-born Jesus. 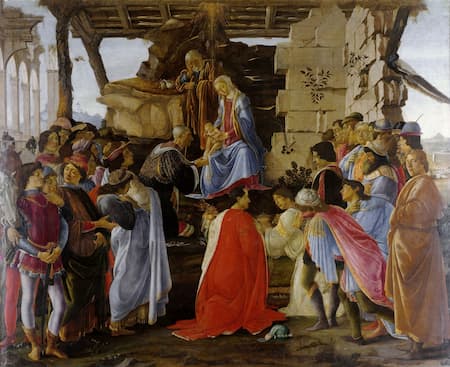 In this painting, created by Botticellii on commission for Gaspare di Zanobi del Lama for his funerary chapel in Santa Maria Novella in Florence, the different magi have been replaced by different deceased members of the Medici family. Cosimo de’ Medici (1389 – 1464) kneels in front of Mary, touching the feet of the child. His sons, Piero (1416-1469), shown in the red cloak, and Giovanni (1421-1463), shown with the hat and blue cloak, are also in attendance. All three were dead when this picture was painted in the 1480s. Cosimo’s grandsons, Giuliano (1453-1478) and Lorenzo (1449-1492) are also shown. Gaspare, the patron, is supposed to be represented by the man in the group on the far right who, dressed in light blue, looks out at the viewer. Botticelli pictured himself as the man in the yellow cloak on the far right, who also looks out at the viewer.

In his music for this image, Respighi uses as his centre point the medieval hymn Veni, Veni Emanuel (Oh Come, Oh Come Emanuel) and the Italian Christmas song Tu scendi dalle stelle (You descend from the stars), less familiar than the first. Respighi twists the hymn, taking it to new keys with often surprising melodic twists and turns.


The last image chosen by Respighi is one of Botticelli’s most famous images: The Birth of Venus. 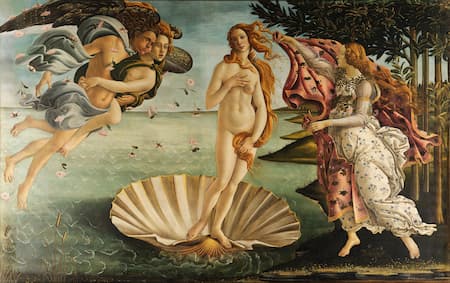 Often shown as a pair with the Primavera painting, above, this painting takes us to the point where Venus, who has emerged fully-grown from the sea, arrives on land on her scallop shell. On the left side, Zephyr, the west wind, blows her ashore. In his arms, he carries the lighter wind Aura. Venus’ hair catches the wind as do the hair and clothes of the woman on the right who has come to greet Venus and clothe her. Just like Flora in the first painting, she is clothed in a dress covered in plants.

In his music, Respighi takes us to the gently lapping waters at the sea side. The whole effect is very impressionistic. Venus rises and there is suddenly silence at the point of the climax (03:46). The sea returns, and the wind slows, and she is here.


Just as you feel slightly out of this world after you explore the complexities of the Botticelli paintings, so Respighi makes you feeling a bit lost as he leaves you on the seaside.