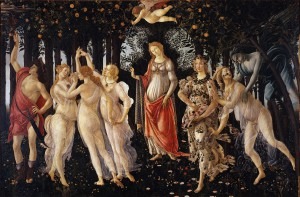 We know Sandro Botticelli as that 15th-century painter who was able to capture the ineffable in his works, be it the personification of a season, the birth of a goddess, or an important Biblical meeting.

The early Renaissance painter Botticelli (c.1445-1510) worked in Florence with Lorenzo de’ Medici as his patron. Although appreciated at the time, he fell out of favour until the late 19th century when the grace in his paintings could be appreciated again. An apprentice of Fra Filippo Lippi by around 1462, by 1470 he had his own workshop.

Three of his most famous works, La Primavera (1482), Adoration of the Magi (1475), and The Birth of Venus (1486), held in the Uffizi Gallery in Florence, were used as the basis for Ottorino Respighi’s 1927 work Trittico Botticelliano. 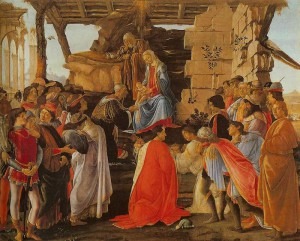 Botticelli: Adoration of the Magi

In the three movements of his work, Respighi gives us more than just the surface of the painting in music. He is able to create the sonic world of the paintings, using the background details to fill out the imagery.

In his first movement, La Primavera, he begins with an excited twittering of the birds, unseen in the painting but certain to be part of Spring’s entourage. He then picks up the idea of the dance, represented on the left side of the painting. As we read the painting from right to left, Zephyr, the wind of Spring, turns Flora into Spring, robed in her dress of flowers. Venus, in the centre, with her red robe, represents a benevolence that protects mankind. The three Graces dance and at the far left, Mercury (note his winged sandals) dissipates the clouds. 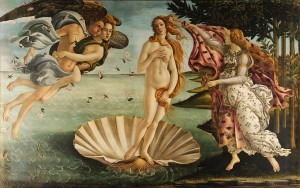 Botticelli: The Birth of Venus

In the slower second movement, L’adorazione dei Magi, is built around sounds we cannot see in the picture: two Christmas songs, “Veni, Veni Emanuel” and “Tu scendi dalle stelle” (You descend from the stars) are exquisitely orchestrated. Those familiar with the first hymn will hear it transformed both tonally and harmonically. The second less-familiar song is transformed with shimmering percussions sounds and seems to take on a middle-eastern quality in the setting. 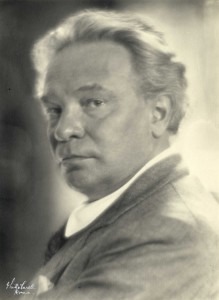 The last movement, La nascita di Venere, is much more impressionistic as Venus rises from the sea. According to the usual myths, when Venus was born, she was carried on a seashell and sea foam to the island of Cythera. On the left, the figure of Zephyr carries the nymph Chloris and provides the breeze to guide Venus. On the right, Spring in her dress of flowers greets Venus. We’ve met Venus, Zephyr, and Spring before, in the first movement. Respighi seems to make his piece out of the wind itself, ebbing and flowing and then coming to an abrupt halt as Venus comes to us, then the wind quietly fades away.

Respighi: Trittico Botticelliano: III. La nascita di Venere: Allegro moderato (Academy of St. Martin in the Fields Orchestra; Neville Marriner, Conductor)
It’s unusual to find a setting as subtle and impressionistic as Respighi’s that still manages to convey the magic of the original paintings. By assuming the audience has a familiarity with the images, Respighi doesn’t need to give us the entire setting, but enables us to imagine the images within the musical world he has created.