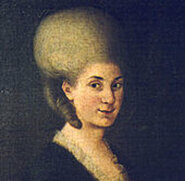 In March of 1785 Leopold Mozart was visiting his son in Vienna, and he reports to his daughter Nannerl, “Your brother recently made 559 gulden at his concert, which was unexpected, because he is simultaneously giving his six subscription concerts at the casino at the Mehlgrube, which have more than 150 patrons, each of whom pays one souverain, about 13.5 gulden; bringing gross revenue for the series of more than 2,000 gulden. In addition to that, he has often been playing in the theater at other concerts. As for the keyboard arrangement of Entführung aus dem Serail, it can be said that a certain Christoph Torricella is setting it. The arrangement by Torricella is by your brother, but it is still not yet ready. He may have completed only the first act. I’ll ask about it. Torricella has also engraved three sonatas, of which one is for violin. Enough. I shall purchase everything that is issued…” 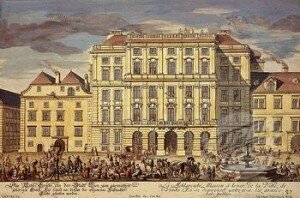 Old Mehlgrube in the 18th century

When Mozart returned to Vienna in late November 1783, he entered his busiest and most successful years of his life. For his subscription concerts between February 1784 and December 1786, he composed a dozen piano concertos, unquestionable the most important works in this genre. Mozart certainly published prodigiously, and the three Torricella sonatas do include the Violin Sonata, K. 454. The publishers Lausch and Traeg offered manuscript copies of six piano concertos and three symphonies, respectively, and Artaria issued the six quartets dedicated to Haydn. And as we subsequently learn from Leopold, in addition to his public performances and publishing activities, Mozart was in great demand for private concerts.

Wolfgang Amadeus Mozart: Violin Sonata No. 32, K. 454
“We never arrive back home before one A.M., and I never get up before nine. We have lunch at two or half-past two. What lousy weather! Every day there are concerts, more and more students, music, and copying. Where can I escape? If only the concerts would end. It is impossible to describe the hustle and bustle. Your brother’s pianoforte has been moved at least twelve times from his house to the theater or to someone else’s house. He has had a large pedal piano made, which goes under the body of the piano and is about two feet longer and extremely powerful. And each Friday this has been carried to the Mehlgrube casino and also to the respective residences Count Zichy and to Prince Kaunitz…”

With a million kisses from my heart I am eternally your faithful father.
Leopold Mozart