We did a survey of Beethoven monuments and it turns out that there are basically two kinds. The most traditional is Beethoven in full glower, standing or sitting and thinking of things far beyond the knowledge of mere mortals.

The oldest of these was put up in 1845 in Beethoven’s home city of Bonn.

The statue was unveiled on Beethoven’s 75th anniversary of his birth. Funds for the statue were raised by Franz Liszt, who held a concert with Frédéric Chopin. Schumann wrote a piano sonata for it but it was declined by his publishers and later appeared as his Fantasie in C, Op. 17, dedicated to Liszt. Mendelssohn wrote his Variations sérieuses in D minor to support it. The variations were part of a collection published by Pietro Mechetti for the Beethoven monument. The volume also included contributions from Chopin, Czerny, Dohler, Henselt, Kalkbrenner, Liszt, Moscheles, Taubert and Thalberg.


Next, Vienna claimed Beethoven as their native son and put up a memorial to him. Around the plinth are scattered small putti, the center one with a lyre that might have been used by mythological Orpheus, and heroic figures. The woman holds up a laurel wreath of fame. 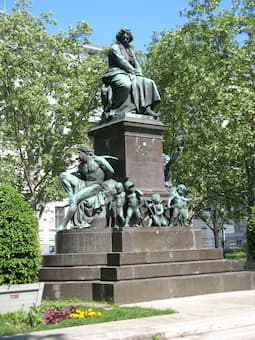 In central courtyard of the Naples Conservatory is a statue that captures Beethoven seeking inspiration in the countryside. It’s informally posed, his shirt is open at the front (curiously no paintings show him this way), and he’s contemplating his next great creation. 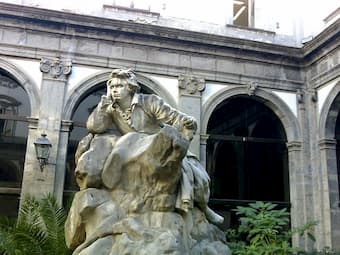 
Beethoven isn’t always shown full figure – this 1897 bust by Johannes Gelert captures the man in a moment of inspiration. This bust, formerly in Chicago, was stolen in 1970. 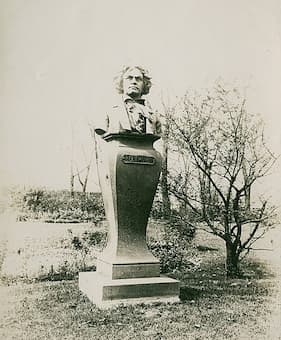 In the Tiergarten in Berlin is a triple memorial, but to three composers who didn’t really have a Berlin presence: Beethoven, Haydn and Mozart. The monument was commissioned by Kaiser Wilhelm II and erected in 1904. It was damaged in WWII and was only fully restored in 2007. Despite its 20th-century date, it was done in a very Baroque style – see the wreath of Fame that encompasses all composers at the top. 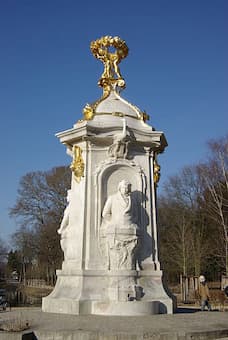 The death mask of Beethoven, attached to the plinth, is part of a monument to the composer in Mexico City. 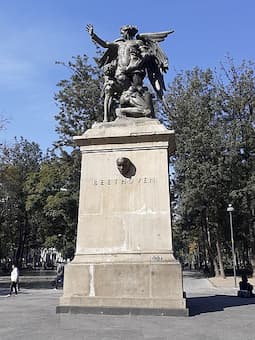 Hugo Uher’s 1929 monument, set into a semi-circular surround, again shows the composer walking and thinking. The monument had been put up when this area of Czechoslovakia was largely German speaking and was taken over by Germany in 1938 when it was known as Sudentenland. This statue was placed on the site of a monument to Emperor Francis Joseph I, which had been removed shortly after the founding of Czechoslovakia. 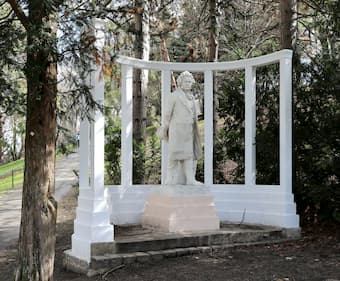 The last of the traditional monuments again places Beethoven in a semi-circular space, this time with columns. Hänlein, the sculptor, based his image on a 1902 model by Robert Weigl. Robert Oerly was the architect. Beethoven is again in his outdoor mode, hat held behind him, glowering in thought. 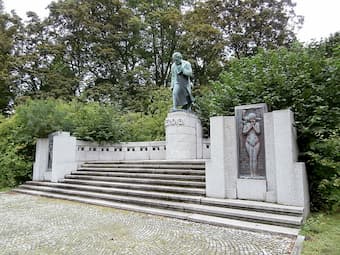 We said above that there were two kinds of monument: the traditional and now the un-traditional. Our first, dating from 1932 by János Horvay, gives us a curious combination of Beethoven and a style more traditionally found on female statues with his wrap falling off his shoulders. 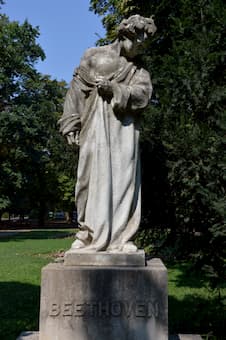 
An even more wild representation of a nude Beethoven is part of a large fountain group in Sweden. The sculptor Carl Milles included Beethoven as part of a large Orpheus Group fountain, with 8 figures floating in the water around Orpheus – one of the male figures wears Beethoven’s face, and the whole 9 sculptures is often viewed as a “sculptural equivalent” to Beethoven’s Ninth Symphony. Beethoven is on the far right, raising his hands. 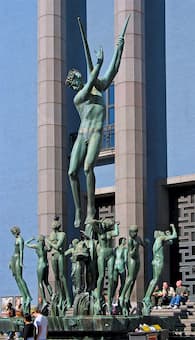 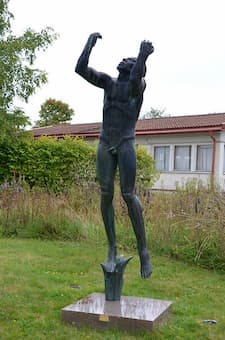 In Bonn, a half-covered Beethoven, his hair replaced by a laurel wreath, sits, slumped, and refusing to engage with passersby. He’s still caught in a moment of reflection. His toes peeking out from under his robe seems to make him vulnerable, despite his isolation. 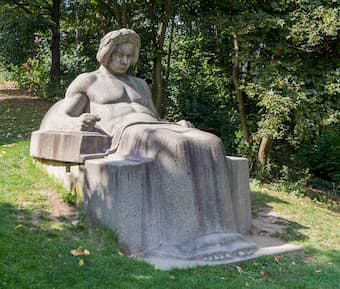 Jumping forward to the 1960s, we get Beethoven only as a head. This massive block by Matija Vuković seems to combine Beethoven’s death mask, with its covered eyes, a larger idea of Beethoven rising from the earth. 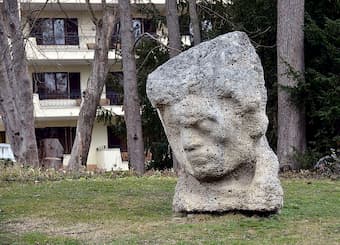 This smoothed down Beethoven by Witold Marciniak is part of a larger collection of composer statues in Jan Kochanowski Park in Bydgoszcz, Poland. 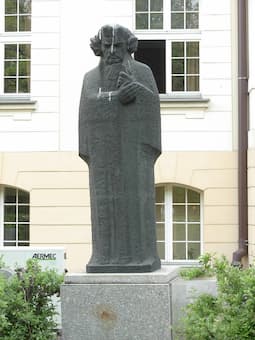 Reducing Beethoven now to a mere symbol, we have a truncated tuning fork standing for Beethoven’s fifth symphony. This is installed on the Donauinsel in Vienna. 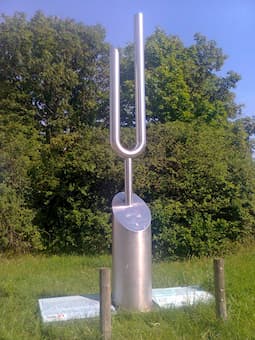 We close with the most recent Beethoven statue. This was erected in Bonn and another, similar copy was put up in Vienna, across from the Kaspar von Zumbusch statue shown above. In a curious way, this statue picks up so many of the images above: Beethoven, with his wild hair, and then a more modern idea. The sculptor says that the two head represent the two sides of Beethoven: One is dedicated to the character and genius of the famous composer, the other visualizes his work. 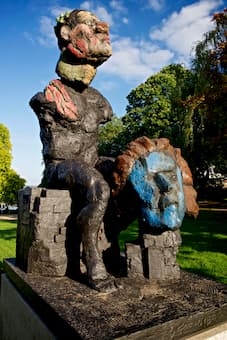 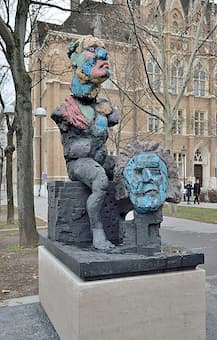 Markus Lüpertz: Beethoven Denkmal (2014) (Stadtgarten / Alter Zoll, Bonn) – the figure boasts two heads: One is dedicated to the character and genius of the famous composer, the other visualizes his work.

You’ll see Beethoven in many places around the world. How we have evolved in our imagining of him is a fascinating study.