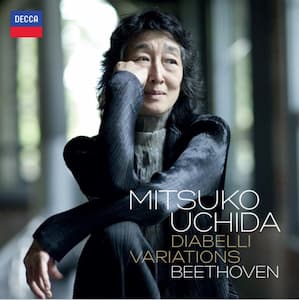 Well known for her interpretations of the Austro-German repertoire, Mitsuko Uchida recorded Beethoven Diabelli Variations in the studio for the first time, although it has been one of Uchida’s warhorses for quite some time.

Considered as “the greatest of all piano works”, Beethoven Diabelli Variations have been lauded for its innovation, vast emotional landscape and exploration of keyboard resources. Anton Diabelli, an Austrian music publisher, wrote the theme and invited the leading composers at that time, such as Czerny, Schubert and Beethoven, to each write one variation on it, which altogether would constitute the “Vaterländischer Künstlerverein”. Legend has it that Beethoven initially disparaged the theme as Schusterfleck (cobbler’s patch) but later decided to work on it to show off his compositional prowess. No matter what, Beethoven ended up writing 33 variations instead of just one, exemplifying his creative genius by how he transfigured a simple waltz into his magnum opus.

Links have been drawn between this ambitious work and his Piano Sonata No. 32 in C minor by musicologists and pianists, including Alfred Brendel. It’s arguable whether it was purely coincidental that Beethoven wrote 33 variations after 32 piano sonatas, and that Variation 33 shared such similarities with Adagio of Piano Sonata No. 32.

Many pianists have tried their hands on this mammoth work, and this hour-long set of variations can easily sound tedious or mundane in the wrong hands. However, Uchida has breathed new life into this work with immense passion and focus. 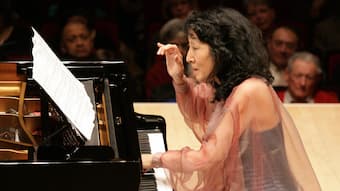 The emotions presented in the work are unbelievably diverse – from utter sobriety to crude humour and from inner darkness to vivacity. Here, each of the variations was individually characterised, with the stark contrasts in mood fully observed. We journeyed from the energetic canon in Variation 19, to the desolate yet somewhat mysterious Variation 20, and then the almost maniac Variation 21. At the same time, the seamless transition between variations made for a strong feeling of continuity and an overarching sense of integrity.

Virtuosity was always at hand when the music asked for it. Variations 10 and 16 enjoyed much brilliance, while Variation 17 was exuberant with its marching rhythm. The technical challenges were often well-negotiated with a sense of abandon, despite a marginally constricted dynamic range in the earlier variations and some occasional unevenness (e.g. Variation 23).

Humour, an indispensable element in this work, was also keenly revealed with nervous energy from Uchida in variations like the 22nd, which was a comical reworking of “Notte e giorno faticar” (Working night and day) from Mozart’s Don Giovanni, but Variation 15, marked Presto scherzando, was somehow lacking in humour. Meanwhile, the more introspective variations were given due gravity. The Bachian Variation 24 (Fughetta) resembled a sincere, prayer-like reflection; Variation 29 was reflective in nature and permeated with a melancholic and subdued atmosphere; Variation 31 was rendered a highly expressive arietta full of grief and solitude.

The Fuga (Variation 32) is certainly one of the highlights of this piece, where the emotions reached the apogee. The textural clarity was slightly compromised, and more differentiation between voices would have been appreciated. Nevertheless, there was a relentless sense of forward momentum and rhythmic vigour, creating a palpable contrast with the quiet chords that lead its way to the final variation.

The final variation reached a celestial state of transcendence and was then transformed into an intricate recollection of memories as the music approached its closing measures. The simplicity and profundity here inevitably reminded listeners of the ending of Beethoven’s Piano Sonata No. 32, Op. 111.

With the culmination of insights, devotion and evolution through live performances, Mitsuko Uchida’s reading of this monumental work was humanistic and cerebral but never academic – yet another testimony of Uchida’s mastery.