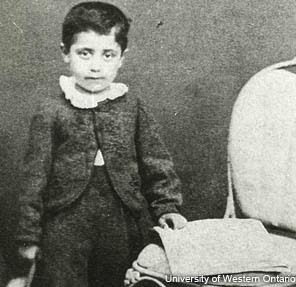 Gustav Mahler, son of an aspiring tavern proprietor and a soap-maker’s daughter, was considered a Wunderkind! At age four, he discovered his grandparent’s piano, and he gave his first public performance at the town theatre in Iglau at age 10. A thriving military and trade center within the Austro-Hungarian Empire, the town was home to an amateur orchestra, a professional theatre, an opera and the church of St. Jakob, each richly contributing to the musical life of the community. Since Iglau was also a major staging point for the Austrian army, colorful military bands regularly participated in local festivals and engaged in concert activities. The memories of these musical impressions—alongside the stunning natural beauty of the Moravian countryside—would haunt Mahler for the rest of his life and dynamically reverberate in his compositions. To further his musical education, Mahler enrolled at the Vienna Conservatory. He took piano lessons from Julius Epstein, and studied composition and harmony under Robert Fuchs and Franz Krenn. Mahler left the Conservatory in 1878 with a diploma, but without the coveted and prestigious silver medal given for outstanding achievement. Although he claimed to have written hundreds of songs, several theatrical works and various chamber music compositions, a single movement for a Piano Quartet in A minor survived the ravages of time.

Composed in 1876, and awarded the Conservatory Prize, the movement is strongly influenced by the musical styles of Robert Schumann and Johannes Brahms. Conveying a sense of passion and longing, Mahler presents three contrasting themes within a strict formal design. The opening theme possesses an ominous and foreboding character, while the contrasting second—still in the tonic key—is passionately rhapsodic. To compensate for this tonal stagnation, the third theme undergoes a series of modulations. Thickly textured and relying on excessive motific manipulation, this movement nevertheless provides insight into the creative processes of the 16-year-old Mahler.