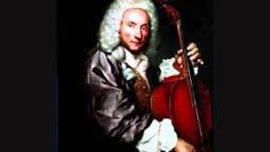 The musical estate of Antonio Vivaldi (1675-1741) contains a vast collection of original manuscripts. Throughout his extended career as musical director at the “Ospedale della Pietà” (Hospital of Mercy) in Venice, a post he held from 1703 to 1740, Vivaldi authored roughly 500 concertos, 46 operas and numerous smaller instrumental and sacred compositions. Although he surely must have composed a large number of Sonatas for solo instruments and basso continuo, Vivaldi was much less careful in preserving these compositions. Today we know, that 76 Sonatas for various instruments have survived, none of them, however, are extent in the composer’s own hand. These include nine Sonatas for Cello and Basso continuo, of which six were published in Paris in 1740, and a further two are found in a copyist manuscript preserved in the Schönborn music library in the Bavarian town of Wiesentheid. Matthias Ferdinand von Regaznig was the representative of the elector of Mainz in Venice, and he was charged with procuring new music for his master. So he dutifully sent new music from Venice to the Schönborn castle, including “rare compositions by Vivaldi.”

Antonio Vivaldi: Sonata in G minor, Op. 14, No. 9, RV 42
Probably dating from the 1720’s, Vivaldi’s “Cello Sonatas” originally served as teaching pieces for his students at the “Ospedale.” The Cello Sonata in G minor, Op. 14, No. 9, unfolds as a sequence of four, slow-fast-slow-fast, movements. Individual movements carry titles designating specific dance characteristics. Lacking all sense of virtuosity, the opening “Prelude: Largo” conveys a melancholy mood, as the cello sings a continuous series of well-articulated phrases. The “Allemande,” although performed at a faster tempo, retains this reflective mood with occasional rays of sunshine intruding via characteristic Vivaldian melodic sequences. An extensively ornamented and brooding melody emerges in the “Sarabande.” A tapestry of slowly shifting harmonies in the continuo submissively supports this highly expressive melody. In contrast, the energetic “Gigue” features a flamenco-style accompaniment, with the cello breathlessly intoning a series of short musical phrases.