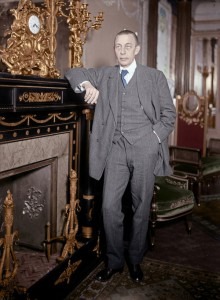 At the 2016 Grammy® Awards, the winner for Choral Performance was for a work that was written a mere century ago. Rachmaninoff’s All-Night Vigil, written in January and February 1915, received its premiere on 10 March 1915. When you consider the wealth and breadth of Rachmaninoff’s compositional expression, a work such as this seems to move his talents beyond those of his contemporaries.

Unfortunately, the anti-religious policies of the new Bolshevik government that came into power in 1917 sidelined the work. The first recording by a Russian choir didn’t take place until 50 years later, in 1965, and that record was never available for public sale in the USSR. The recording is famous for its extraordinary basso profondo voices. Listen to the final notes here, from that 1965 recording:

That’s past history, however. This new recording, by the joint Phoenix and Kansas City chorales under conductor Charles Bruffy, brings us a performance that is truly outstanding. The control, the balance, and the intonation across all voices should be a model for other choirs in this genre. Even in the parallel movement to the 1965 recording you just heard, the American basses seem to be even more resonant.

Rachmaninoff: All-night Vigil, Op. 37: Song of Simeon: Lord, now let your servant depart (Frank Fleschner, tenor; Phoenix Chorale; Kansas City Chorale; Charles Bruffy, cond.)
The work has been praised as both Rachmaninoff’s finest achievement and “the crowning achievement” of the Russian Orthodox Church. The religious service itself combines three canonical hours: Vespers, Matins, and the First Hour into one work. It would be celebrated on Saturday nights (the eve of Sunday) and on the eves of major liturgical feasts. A full religious performance, including the music, does take all night. Rachmaninoff’s setting by itself is nearly 75 minutes of unaccompanied singing for chorus and soloists. In modern western life, we may now see a vigil like this only for wakes held for the dead, and certainly without such sublime music.

There are over 50 recordings of this work and if you are not familiar with it, sit down with this one and use it as a baseline with which to judge the others. One of the things the listener must consider is the difference in the reason for the performance. A performance by a Russian choir is taking this as an important part of a familiar religious ritual in their native language. For a non-Russian performance, it’s neither in their mother tongue nor, probably, even in their local religion. Nonetheless, this recording transcends those accidents of place and gives us a performance that has within it a truly meditative reflection of the world that Rachmaninoff created.