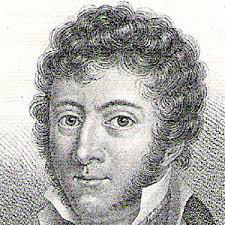 She was described as “a tiny little person, perfectly proportioned and extremely graceful, with lively expression and half-closed eyes, which suggested the wit and malice of a ‘petit diable bleu… She also possessed a coquettish magnetism, which attracted men towards her.” Her name was Adelaide Victoria Percheron, born in Pondicherry, and daughter of Adrien Louis Percheron, war-commissioner of the French fleet. The Percheron’s resided in St. Petersburg, and the town was abuzz with the Irish pianist sensation John Field. Field had arrived in St. Petersburg with his teacher and mentor Muzio Clementi in the winter of 1802, and Field was so impressed by the artistic life of the city that he decided to stay a bit longer. He played a busy concert season with the Saint Petersburg Philharmonic Society, and embarked on an extensive concert tour of the Baltic States in 1805. He also set up a highly successful private piano studio, giving lessons to affluent and well-educated members of society. Adelaide, it appears, was a highly gifted pianist and at one time or another also became Field’s student.

John Field: Nocturne No. 10 in E Minor
At some point in 1808—and we really don’t have detailed information—John Field and Adelaide Percheron got married. However, the good life in St. Petersburg and Moscow was taking its toll on John Field. His liking for alcohol in the most expensive forms left him inebriated for weeks on end. One famous anecdote tells of a concert during Lenten season in 1810, when the Governor of Moscow sent the chief of police to find Field and bring him to the concert hall, whatever his condition. Field was eventually found in a bar surrounded by his drinking buddies. He was placed into a carriage and rushed to the hall. Field stumbled to the piano, and swaying slightly, bowed to the audience who gave him a roar of applause! The marriage, as everybody had hoped, did not turn out to be a stabilizing influence after all. In fact, there was a great deal of conflict in his private life. Field was lethargic and easy-going, and his wife was described as “febrile and emotional.” His drinking intensified, and she resumed her flirtatious manner. One acquaintance snidely remarked, “A hat on a walking-stick would be enough to make her start her little tricks.” They endlessly quarreled, and whatever love they might initially have felt towards each other, gradually turned to indifference and eventually to dislike.

John Field: Nocturne No. 12 in G Major
By 1811, the couple had moved back to St. Petersburg, and Field found consolation in the arms of Mademoiselle Charpentier, who apparently was a member of the French Opera Company stationed in St. Petersburg. This turned out to be a long-term relationship, and by 1815 Charpentier bore him a son who was christened Leon. Field was still living at home with Percheron, who turned a blind eye to her husband’s liaison. As such, it must have come as a great shock to both that after nine years of a childless and increasingly unhappy marriage, Percheron became pregnant. The child was born in 1819 and named Adrien Field, after his maternal grandfather. By now, Field had grown deeply attached to little Leon, who was showing signs of great musical ability at age 4. The situation was rife for some kind of resolution, but characteristically Field let matters drift. And so it was once more left to Percheron to make the decisive move. Shortly after the birth of her child, she packed her things and moved to Smolensk, taking her baby with her. While Percheron set up a highly successful piano studio—she was a gifted musician and pianist who had appeared in concerts with her husband—Field creative gifts failed him for several years. His health continually deteriorated, and his addiction to alcohol earned him the moniker “Drunken John.” John and Adelaide never met again, yet he carried a miniature of her with him until the end of his life.
John Field: Nocturne No 18 in E Major, “Midi”