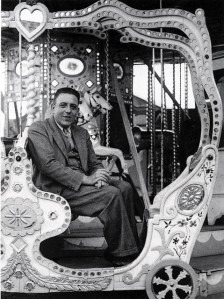 The French poet, novelist, dramatist, designer, boxing manager, playwright and filmmaker Jean Cocteau magnanimously announced in 1918, that his principal goal was the elimination of all foreign and specifically German elements from French music and culture. To that end, Cocteau became the unofficial spokesman for a group of six composers, who in turn had taken their musical inspirations from the music hall, the cabaret and the circus. “Les Six” made their official debut with music for Cocteau’s play “The Marriage on the Eiffel Tower,” which vacillated between irreverence and incomprehensibility. Francis Poulenc (1899-1963), who supplied two musical compositions for Cocteau’s play, and who was described as “half bad boy, half monk” by the Parisian Press, remained most loyal to the premise of Cocteau’s manifesto. In his early sonatas, primarily written for wind instruments, Poulenc reduces all formal and musical elements to their bare essence. Darius Milhaud suggested, “Francis Poulenc is music himself, I do not know of any other more direct music, expressed in a simpler way, and that goes straighter to the target.”

Francis Poulenc: Sonata for Trumpet, Horn and Trombone, Op.33
The Sonata for Trumpet, Horn and Trombone, composed in 1922, continues to rely on tuneful simplicity and good humor. However, rather than finding his inspiration in the music hall, the composer sheepishly returned to the musical styles of the past. Critics, who objected to Poulenc’s directness of expression, spitefully called this Sonata “18th-century music with wrong notes.” The opening “Allegro” cleverly relies on the harmonic language and appropriate formal structure of the past. However, the melody in the style of a folksong, introduces delicious dissonances. The contrasting lyrical section, on the other hand, produces a “correct” melody, with the harmony providing unexpected surprises. The “Andante” offers humorous musical clashes, while the “Rondeau” returns to imitate another folksong. A great deal of rhythmic flexibility allows the music to continuously accelerate, eventually speeding towards a final cadential section full of witty musical humor.