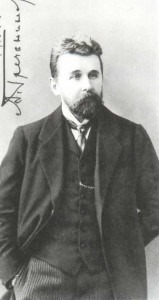 Although his father was set steadfastly against it, Alexander Grechaninov was determined to become a musician. He abruptly left High School and was accepted at the Moscow Conservatory on a partial scholarship. During his years of study he witnessed the historical concerts of Anton Rubinstein, and he shook hands with Tchaikovsky. Yet, his composition and counterpoint courses with Taneyev and Arensky did not go according to plan. Arensky found no talent in his compositions and flatly told him that he should not expect to graduate. Things came to a head, and following a particularly heated argument Grechaninov was told to leave the Conservatory. It was during these tumultuous times that Grechaninov met and fell in love with fellow music student Vera Ivanovna. They quickly decided to get married, but things did not go smoothly either!

For one, Vera’s father was J. F. Röhrberg, an engineer, architect, and later director of the Nizhny-Novgorod Railroad. The Röhrberg’s had money, friends in high places and considerable social influence, and Mister Röhrberg considered his daughter’s marriage to a man outside his social standings an utter abomination. Grechaninov writes in his autobiography, “Vera Ivanovna implored him tearfully to relent, and he finally agreed to a compromise. He suggested a year’s separation, during which time we were not to see each other or even correspond. He hoped that in a year’s time her love for me would cool off. She agreed, and wrote me about her father’s decision.” For Grechaninov, this was hardly a popular agreement, and he initially contemplated to elope with his sweetheart. In the end, he wrote Vera a long letter reproaching her bitterly for agreeing to such a miserable condition, yet nevertheless expressed his convictions that their love would endure. And he “set the day when we would again communicate with each other as the anniversary of my first declaration of love, on 22 December 1889.”

Alexander Grechaninov: Cello Concerto, Op. 8
Grechaninov departed for St. Petersburg to continue his musical studies with Rimsky-Korsakov, and Vera remained in Moscow. When 22 December 1890 finally came around, Grechaninov had returned to Moscow for his Christmas holiday, but there was no communications from Vera. “I was completely distraught. I refused to accept my misfortune; I refused to submit to my evil fate. Yet, I had no means whatever of finding out what was going on with Vera Ivanovna.” However, fate did intervene! While Grechaninov was aimlessly strolling around Moscow, he suddenly saw Vera coming towards him. “Why, oh why did you torture me?” he exclaimed. “Why did you not write me at the appointed time?” “But it is not yet January 3,” she replied, “and I promised my father not to see you and not to write you before then.” Apparently, Vera had counted the beginning of their separation from the date of her promise to her father, and Grechaninov from the day of his declaration of love! Confronted by such overwhelming evidence of love, Mr. Röhrberg had no choice but to consent to the wedding. The wedding ceremony was held on 21 February 1861 in St. Petersburg, and Rimsky-Korsakov was the best man. “With what solemnity, with what simplicity did he observe the ritual,” Grechaninov writes, “holding the icon and then the sacramental bread and salt.” The newlyweds continued their respective musical studies and settled into a reasonably comfortable domestic routine. “To our great disappointment, we had no children,” Grechaninov writes, and this fact would prove to be the source of increasing marital tension. More on that in our next episode.