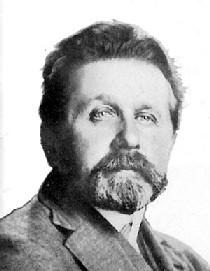 Grechaninov’s most enduring and influential musical gift to posterity is surely found in his liturgical music. Breaking entirely new ground, he returned to the old Slavonic traditional chants of the Russian Greek Orthodox Church. Folk-like harmonies and motivic counterpoint provide a “vocal orchestration” that emphasizes an almost hypnotic relationship between solo and choral parts. On occasion, Grechaninov even used instruments in his liturgical work! This new musical style aroused strong opposition from conservative church musicians, and rather predictably, it could not be performed in church settings in his native Russia. Nevertheless, Grechaninov was granted a 2000 Ruble pension for his liturgical music from the Tsar.

Alexander Grechaninov: Be joyful in the Lord, all the earth, Op. 19, No. 2

After the Revolution of 1917, Grechaninov lost his pension and felt his religious and political convictions at odds with those of the Communist regime. On the invitation of a rich American patron, he began to travel to Western Europe, first visiting London and Prague. Eventually, he settled in Paris in 1925, a city that would remain his home until 1939. He made his living as a pianist and composed a number of outstanding works, including his Piano Trio No. 2 in G major. Completed in 1930, the work was published in Leipzig seven years later. Scored in three movements, the work opens with a rustic principal theme that is tenderly contrasted by a lyrical cello melody. Harmonically adventurous, with shades of Debussy, Richard Strauss and Max Reger, the general harmonic idiom, nevertheless remain rather conservative. The excitement of the first movement is replaced by a contemplative three-part intermezzo, and the impetuous Finale culminates in a joyous fugato.

In his memoirs, written four years before his death in 1952, Grechaninov explains, “I was tremendously gratified that it was not in vain that I had spent so much effort and time to master the symphonic form, which to me is the ultimate medium of musical expression. I may not live to see the day when my symphonies will receive recognition, but I have faith in their survival after my death.” Regrettably, Grechaninov’s wish did not come true and his symphonies have not found their rightful place in the concert hall. In all Gretchaninov composed five competed symphonies, and began drafting a 6th. These works “speak the language of the Russian National School, but the inflection is all his own.” Taking his musical cues from Tchaikovsky, whom Grechaninov worshipped and actually met as a young man, the 5th Symphony turns completely away from the fashionable modernism practiced by Stravinsky and other exiled colleagues. Leopold Stokowski directed the Philadelphia Orchestra in its first performance on 5 April 1939. Remarkably, Grechaninov’s 5th Symphony was first heard in Russia only during the 2009/10 Season!

With the outbreak of hostilities in Europe in 1939, Grechaninov immigrated to the United States, and settled in New York in 1940. He already had visited the country on numerous occasions since 1929, and he took American citizenship at age 85 in 1949. He was deeply affected by events in Europe and his Mass setting Et in terra pax (Peace be on Earth), completed in 1942, is a quiet and devout reflection on the troublesome times at hand and his hopes for the future. Scored for mixed choir and organ, the music blends traditional chants with a gently expressive homophony and serene mastery of choral texture. The work never attempts to portray the terrors and agonies of war, but emphasizes a quiet acceptance of spirituality and faith.

One of the most important transitional Russian composers, Alexander Grechaninov carried the traditions of the Russian Romantic masters into the second half of the 20th century. Given his enormously powerful musical pedigree and legacy, it is somewhat surprising that his entire oeuvre has not yet been published and recorded. Since most of his manuscripts reside in the Music Division of New York Public Library for the Performing Arts, it is hoped that young scholars and performers will eventually take up his cause.